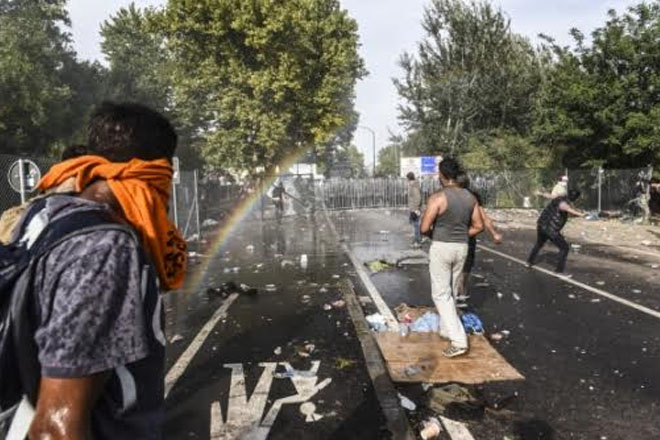 Clashes on Hungary border as migrants open up new route

Röszke, Hungary (AFP) — Hungarian police clashed Wednesday with several hundred migrants furious at being blocked from crossing the border with Serbia, as desperate refugees opened up a new route into Croatia to get round Budapest’s razor-wire barrier.

Authorities fired tear gas and deployed water cannon to quell what they said was an “aggressive” crowd of some 500 people, as police helicopters buzzed overhead.

At dawn, a small group of women and children crossed cornfields into Croatia from Serbia, followed shortly afterwards by around 370 mostly Syrians and Afghans, according to an AFP correspondent at the scene.

Croatia said it was expecting another 4,000 people in coming days.

Pressure is building for a special EU summit to come up with solutions to the continent’s worst migration crisis since World War II, with the bloc bitterly split and free movement across borders – a pillar of the European project – in jeopardy.

Croatian Prime Minister Zoran Milanovic – who has blasted Hungary’s border fence as “unacceptable” – said all migrants could pass through the EU state, allowing them to push on towards Slovenia, Austria and Hungary’s fenceless southwestern frontier.

“We are ready to accept and direct those people, their religion and colour of skin is completely irrelevant, to where they apparently wish to go – Germany and Scandinavia,” Milanovic told lawmakers.

But his Slovakian counterpart Robert Fico added to the war of words between EU capitals by warning Europe was at risk from what he called a “migrant onslaught”.

“The EU has found itself under the onslaught of hundreds of thousands of migrants and has ceased to be a safe place,” the leftist leader told parliament, insisting that “90 per cent of these people are economic migrants.”