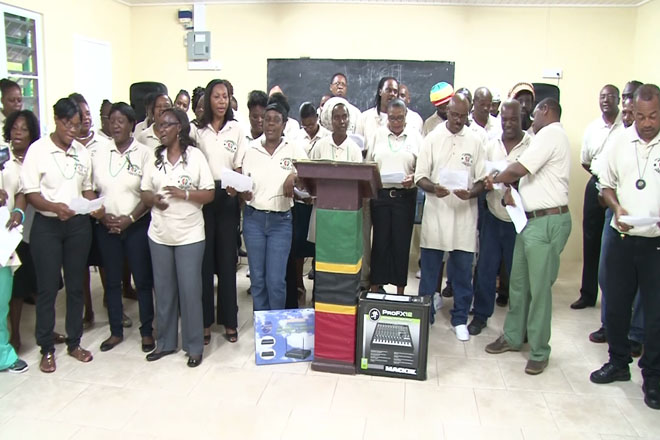 Class of 1982 gives back to Cayon High

Basseterre, St. Kitts (SKNIS) — The Cayon High School class of 1982 recently donated a state-of-the-art Public Address (PA) system to their alma mater as a way of showing gratitude for shaping their lives and providing a sound education to the members.

Principal of the school Addison James, who taught a majority of them, stated that he appreciates the gesture and the equipment will become an integral part in assisting with assemblies, meetings and any other form of audience that they may have. The principal also commended them for making a positive contribution to the nation.

Attending the event was former student of the school Prime Minister Dr. the Hon Timothy Harris who graduated in 1981. He stated that the past students stand as role models for the current cohort.

“It’s critically important every student at Cayon High is an ambassador for the school,” stated the Prime Minister. “The ambassador must make the school proud by his or her actions, his or her performance and we have many persons having graduated from this school who have almost become national icons.”

The Prime Minister also applauded them for their generous donation.