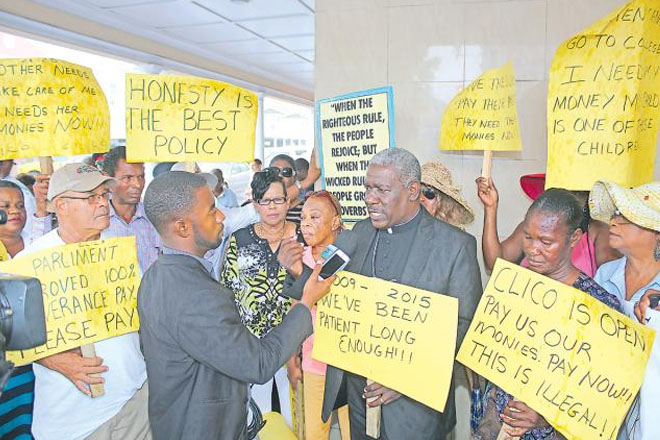 Nassau, Bahamas — More than two dozen CLICO policyholders demonstrated outside Parliament in The Bahamas on Wednesday, claiming they are prepared to do whatever it takes to get relief, even if that means “we have to go to jail”.

“People are starving and hungry and children have had to leave schools,” said Virginia Outten, a former manager at CLICO, who demonstrated for several hours.

“Some of these people have been paralyzed and sick mentally. And the pensionable people don’t know where to turn.

When asked what policyholders are prepared to do, Outten said, “Even if it means we have to go to jail, we will go.

“We are going to come out until something is done. And I mean that. And everyone out here means that.”

Her statement was met with loud applause and cheers. “Do you mean it?” Outten asked the demonstrators.

They shouted back with a resounding “yes”.

There were approximately 13,000 Bahamian policies when CLICO was liquidated in 2009.

Shortly after, then Prime Minister Hubert Ingraham advised policyholders to continue to pay on their policies.

But the policyholders say they still do not know the status of their investments.

Minister of State for Finance Michael Halkitis said recently that the government was still “finalizing” a plan to assist the policyholders and had not made provisions for them in the 2015/2016 budget.

Shortly after 10 am, Minister of National Security Dr Bernard Nottage briefly shook hands with a couple of policyholders before making his way inside the House of Assembly.

When Prime Minister Perry Christie arrived in Parliament Square, the crowd called out to him.

Some shouted, “We want our money, prime minister.”

He did not stop to speak with them.

The Nassau Guardian attempted to interview Christie as he walked toward the House.

As a reporter engaged the prime minister, a member of his security detail grabbed the reporter and pulled him away.

Many of the demonstrators expressed disappointment about being ignored, and said they have been abandoned by the government.

Bishop Simeon Hall of New Covenant Baptist Church, a representative of the group and a policyholder, said he is owed $65,000, money he is relying on for retirement.

Lois Bethel said she believed in CLICO and the government’s promises since the company liquidated.

“I have written to Mr Christie several times and there has been no response whatsoever as yet,” she said.

“At this point we are all very frustrated and disappointed because we see other problems in the country being solved and we have just been ignored.

“… We are Bahamians and we are just trying to get by.

I want Mr Christie to please do something about this.”

Leanora Williams, 69, said she “slaved” for the government for 40 years on the same job.

Williams said she feels “abandoned” by the government and has been struggling to pay her bills because she has not gotten a penny to date.

“I am prepared to do anything to get my money because I need my money,” she said. “I have been patient for long enough.

“I hope something is done because an election is coming up within the next two years.”

Hall said the group would demonstrate again on Thursday.