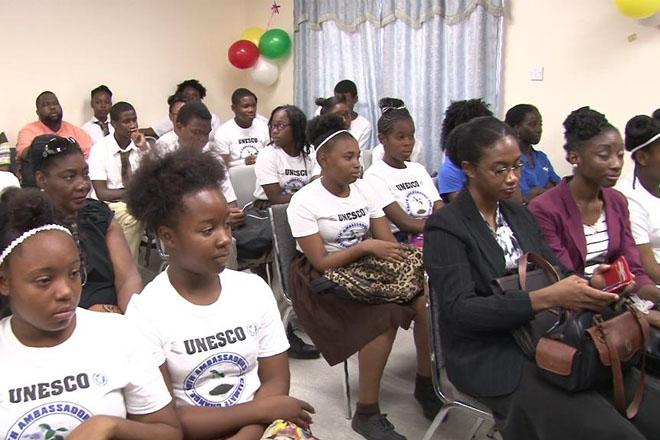 Basseterre, St. Kitts (SKNIS) — President of the Clarence Fitzroy Bryant College (CFBC) Dr. Kelvin Daly charged the new UNESCO Youth Ambassadors for Climate Change to disseminate information on the subject and actively demonstrate that all individuals are responsible for safeguarding the environment.

This took place at the launch of the Youth Ambassadors for Climate Change, at the Foundation for National Development (FND) Conference Room today, May 08.

Mr. Daly described the destruction of the environment that leads to climate change as an “epic war against Mother Nature.” He elaborated that millions around the globe have died from direct and indirect environmental concerns such as starvation and water-bourne diseases. He further emphasized that policies to protect the environment must be “rock solid.”

“Science shows us that interdependency is shared, the simplest of food chains to the complex relationships in food webs are critical for our mutually assured survival – where the loss of one, a single one, can have catastrophic effects on those remaining,” Dr. Daly emphasized. Ironically, we as humans, who directly or indirectly cause these chain reaction do not escape the consequences.”

He noted that change is inevitable.

“Adaptation strategies are being promoted worldwide, with varying degrees of success,” he stressed. “Success often determined not by the absence of credible information, because we all have access to it but by a absence of a comprehensive and sustainable implementation strategy at the national level. We speak in the context of adaptation strategies rather than prevention strategies in this part of the world, simply, because of the tiny carbon footprint that we generate in comparison to developed countries.”

He encouraged the Youth Ambassadors to take the fight for the planet to the next level because it is the current generation that will experience the consequences.