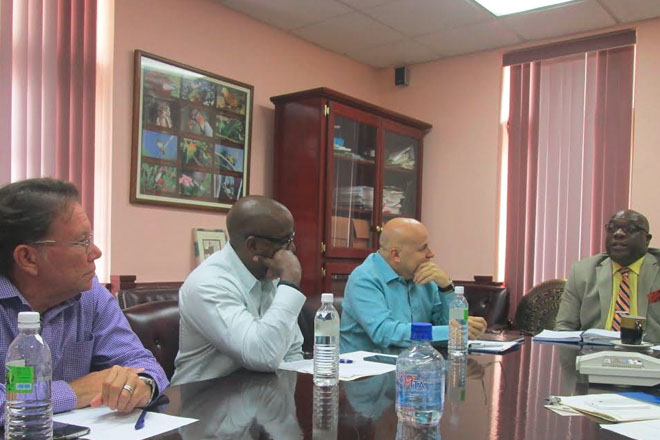 (PRESS SEC) – Prime Minister Dr. the Honourable Timothy Harris and members of his Cabinet met with officials from the St. Kitts-Nevis Chamber of Industry and Commerce on Thursday, April 28th for a roundtable discussion on the economy and other matters of national interest.

Mr. Hobson, the immediate past president, initiated the meeting, which served as a formal introduction of Mr. Rosa in his new official capacity. Mr. Rosa was elected president in late February at the 67th Annual General Meeting of the Chamber of Industry and Commerce.

“We are hoping that the adjusted threshold would assist private sector entities with attracting and retaining personnel with the skills, knowledge and experience necessary for building competitiveness in the private sector,” the Honourable Prime Minister said on Wednesday, April 27th in Parliament.

Their discussion also came on the heels of Cabinet’s removal of all duties and customs service charges on all surveillance equipment to be used by households and businesses, effective April 1st until December 31st, 2016.

The Chamber of Industry and Commerce had advocated for the Government to consider those two matters.

In the second matter, the Chamber wrote to the Ministry of Finance requesting concessions after its consultation with the police high command had found broad support for stepping up the nationwide use of surveillance systems to facilitate crime detection.

“If more people enhance their dwellings with security cameras, the footage becomes useful in a criminal incident,” Prime Minister Harris said during last Thursday’s meeting with the Chamber. “So we were prepared to forgo all the revenues that otherwise could have been had, from VAT, customs service charge and of course the duty up until December 31st, to give businesses and every household an opportunity to do something to enhance their security.”

The Prime Minister added that, “We want more people to become security conscious. We believe that every commercial entity, especially of a certain size, every bank and every supermarket must have these surveillance systems in order to play a responsible role in society.”

Prime Minister Harris said the Financial Secretary, Mrs. Hilary Hazel would send a formal letter to the Chamber of Industry and Commerce soon, encouraging its members to take advantage of the waiver period.

“We hope that you would publicize this letter and send it around to your established entities, so that more persons become aware and can take advantage of the removal of all duties and customs service charges on all surveillance equipment up to December 31st,” the Prime Minister said.