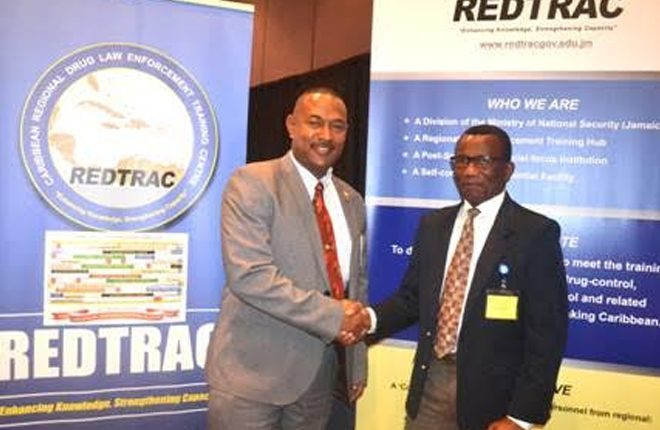 (RSCNPF): Commissioner of Police Mr. Ian M. Queeley was recognized by the Regional Drug Training Centre (REDTRAC) as a ‘historic’ Graduate during a brief but very significant ceremony at the 32nd Annual General Meeting and Conference of the Association of Caribbean Commissioners of Police (ACCP) being held in Aruba.

Major George Benson, Director-Principal of the Jamaica based Regional Drug Training Centre (REDTRAC) recognized Commissioner Queeley as a member of the very first REDTRAC class in 1996. He was at the time serving as a Detective Sergeant and supervisor within the Anti-Drug Unit.

In recognizing Commissioner Queeley in front of his colleague commissioners, Mr. Benson said, “standing before you is one of REDTRAC’s first graduates, he was in the first class from November to December 1996. Over the years, he has provided valuable feedback, both from an operational and administrative standpoint.” He added, “Commissioner Queeley is testament to the quality and value of our training at REDTRAC. Seeing his success makes us proud to know we are helping our member states, build capacity and develop their future leadership.”

A part of Major Benson’s mission at the ACCP this year is to promote REDTRAC as a Centre of Excellence, as well as to highlight the activities of the year long celebrations for their twenty-one (21) years of service to the region.

The Regional Drug Training Centre (REDTRAC) was established in September of 1996 with the support of the United Nations International Drug Control Programme (UNDCP) with a goal to develop and deliver training courses to meet the needs of law enforcement, drug-control, border-control and financial-control Agencies across the English-speaking Caribbean.

The centre serves a special ‘Community of Practice’ comprising: Police Services, Customs Departments, Military Forces, Immigration, Port Authority, Port Security and other Agencies that provide direct or indirect support to the afore-mentioned entities. These include Ministries, Department and Agencies (MDAs) such as Financial Investigation Departments, Revenue Protection Units, Special Anti-Crime/Anti-Drug Units, members of the judiciary, and other National Security assets from across the region.