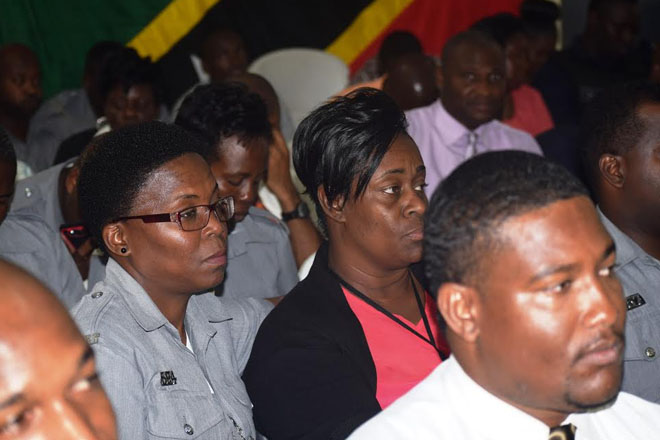 (RSCNPF) — Commissioner of Police Mr. Ian Queeley used his Commissioner’s Lecture today (April 07) as the venue for the re-energized Police Welfare Association and the Police Sports Club to share their 2016 goals and objectives with the Police Service.

Today’s lecture was lively in that the retired Force Chaplain Pastor Leroy Benjamin was present and gave his last words to the officers, he reminisced about his almost twenty (20) years serving as the Force Chaplain and said, “I am filled with fond memories”. Pastor Benjamin spoke to the friendships developed and his love for the Police Service and those who serve. He ended by reaffirming his commitment to assist in any way he can in the future.

An active year for the Sports Club has been planned and was shared by Club Chairman Constable Watt. The reintroduction of the Police Week and the associated sporting activity is a goal for the club this year. PC Watt also encouraged the officers to participate in the monthly health activities and highlighted the success of the first health and fitness walk on Saturday (April 02).

In keeping with past lectures, a lively comment and question and answer session followed the presentations.