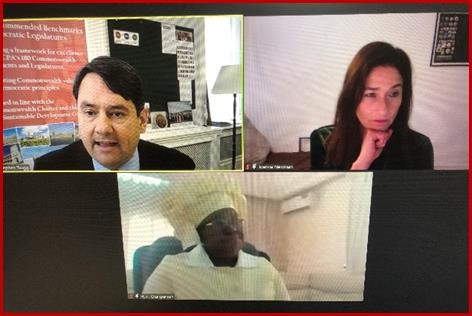 The Chairperson of the CPA Executive Committee, Hon. Emilia Monjowa Lifaka MP, Deputy Speaker of the National Assembly of Cameroon opened the webinar and spoke of the challenging times that all organisations are facing with the external flux and uncertainty of COVID-19. The CPA Chairperson said: “The CPA will prioritise its strategic objectives and will continue to work closely with partner organisations in the Commonwealth.”

The webinar event provided an opportunity for the recently appointed CPA Secretary-General, Stephen Twigg, to meet virtually with representatives of many Commonwealth organisations and external partners and to discuss the upcoming work of the CPA and in particular, the new CPA Strategic Plan 2022-2025. The CPA Secretary-General spoke of his commitment to engage and consult with as many Commonwealth partners as possible during the planning for the new CPA Strategic Plan and said: “The CPA recognises the importance of consultation with organisations at local and regional level as well as national and international.”

The CPA Secretary-General spoke of the challenging global context due to COVID-19 and of the opportunities that new technology can bring. “Technology has the potential to engage with a much wider audience and can increase the engagement of citizens with their Parliaments and Parliamentarians.”

The CPA Secretary-General also spoke of the critical importance for global progress of the values enshrined in the Commonwealth Charter as well as the Commonwealth Latimer House Principles and the CPA’s Benchmarks for Democratic Legislatures which provide a framework for good governance in the Commonwealth. “Democracy, the rule of law and human rights are all fundamental principles that we must work towards achieving and the UN Sustainable Development Goals provide us with an ambitious set of targets for the wider Commonwealth family to realise.”

A recording of the CPA webinar on ‘The Commonwealth in 2025: Building effective partnerships’ will be available on the CPA’s YouTube channel at: www.cpahq.org/cpahq/youtube.

To feedback on the new strategic plan 2022-2025 and future direction for the Commonwealth Parliamentary Association visit www.cpahq.org/cpahq/consultation