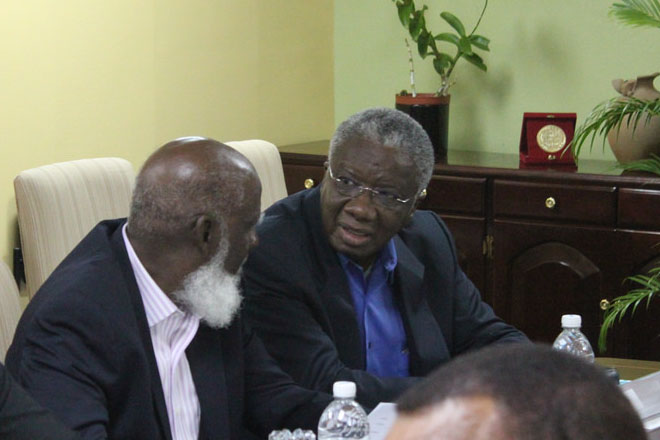 Bridgetown, Barbados (BGIS) — Barbados Prime Minister Freundel Stuart is hopeful that coming out of the Caribbean Community (CARICOM)-US Summit, concrete action will be taken, so that the people of the region can “feel the effects of the relationship between the Caribbean and the United States of America”.

Stuart made this comment ahead of the start of the summit, which took place in Kingston, Jamaica, on Thursday.

At the meeting, CARICOM heads of government and president of the United States, Barack Obama, discussed critical issues of interest to the two sides, including competitiveness.

Insisting that the region was not looking to larger countries like the United States to “do for us what we can do for ourselves”, the prime minister, however, stated that as small island developing states, the nations of the Caribbean faced challenges which “had much to do with the economic and political behaviour” of countries in the North Atlantic.

“I think the time has come for us to say exactly how we feel about some of these things, very respectfully of course. I do not think we can continue to meet for photo opportunities, when in fact the people of the Caribbean are looking on, expecting concrete results from encounters, such as that which we are going to have with President Obama,” he contended.

Pointing out that the region had a Diaspora in the United States that contributed significantly to the development of that country, Stuart stated that he hoped that Obama saw the need for his country “to do a little more” for the people of the Caribbean.

“If nothing more comes out of the meeting, [we would wish] a commitment on the part of the Unites States to sit with us for a much longer period than we are scheduled to sit [on Thursday] to talk through our challenges, not in a way that puts the US in any position of verticality in relation to the people of the Caribbean, but in a relationship based on horizontality,” he said.