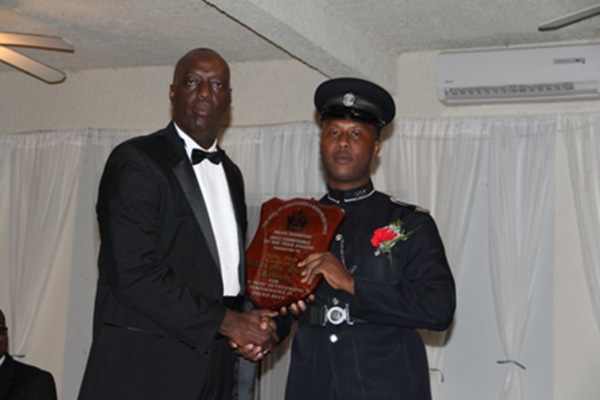 Nia Charlestown Nevis — Police Constable 740 a nominee of the Violent Crimes Unit, walked away with the coveted title of the most outstanding Constable of the Year for 2013, when the Royal St. Christopher and Nevis Police Force, Nevis Division in collaboration with the Nevis Island Administration (NIA), held its 11t h Police Constable Awards Ceremony and Dinner at the Occasions Entertainment Arcade on March 01, 2014.

In response to the award, Constable Rohan Laborde of St. Vincent and the Grenadines said his journey to St. Kitts and Nevis four years ago was not easy but at that time he was fulfilling his childhood dream to become a police officer.

“It wasn’t a very easy one but my dream as a child was to become a policeman and I needed to turn my dream into reality.

“Being part of this profession has taught me patience, honesty, respect and how to live, love and survive. Even though I am miles away from home, I can definitely say Nevis is home away from home,” he told those who witnessed the ceremony.

The officer accepted the honour with humility and thanked the Strategic Planning Group for hosting another awards ceremony.

“It is with great honour that I accept this prestigious award as Police Constable of the Year in the Nevis Division.

“I will not accept it with the belief that I have reached the top but will accept it as a source of encouragement to keep on working hard,” he said.

He also thanked God for what he had done for him and his family in St. Vincent.

“I would like to give God praise and thanks for every single thing he has done for me for without him I would be nothing…Special thanks to my friends and family back in St. Vincent, especially my mom who has supported me in every way throughout my life. To Sgt. [Alonzo] Carty and Sgt. [Eurita Collins-] Percival, I say a very big thank you for believing in me and nominating me to receive this award.

“There is a saying that goes like this ‘Beside every strong man there is a stronger woman.’ However, to you my loving girlfriend, I must express a world of thanks for motivating me to be a better worker, a better daddy to our baby and more so for being a better man. I love you,” he said.

However, Constable Laborde while he thanked his co-workers did have some words of advice for them.

“I have started lifelong friendships with some of you and will never forget all those memorable moments we have shared. Thanks for the very enjoyable cricket, football and basketball matches as well as the food and drinks. Most of all thank you for having my back.

“As we move forward, let us remind ourselves that we are a team and we are working together to serve and protect the people,” he said in conclusion.

The annual awards ceremony was an initiative of the Strategic Planning Group to recognise junior officers who contributed significantly towards the achievement of its objectives in an effort to stimulate and motivate them to provide the quality of service the citizens, residents and visitors deserve.

The Strategic Planning Group of the Royal St. Christopher and Nevis Police Force, Nevis Division was formed in 2002 when concerns were raised about the escalation of crime on Nevis.

According to the Group’s sitting chairman Sgt. Joel Caines, Heads of Departments and Stations were brought together to review and strategize policing on the island.

“To ensure more effective and efficient policing in Nevis. Weekly meetings of the Group are held to evaluate the progress of these initiatives,” he said.