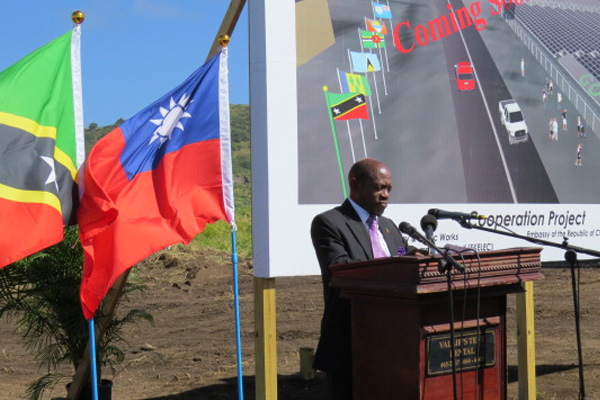 Basseterre, St. Kitts (CUOPM) — St. Kitts and Nevis continued its very firm and steady march towards becoming the world’s first sustainable island state with the start of construction of a second solar farm.

“Our country takes another leap forward, a very giant leap in our programme of energy cost reduction and electricity costs reduction. Today, your Government undergirds its commitment to free us all from the fossil fuel reliance which has burdened so many countries for so very long, and to harness the power of the sun – a power which Nature has given to us in such great abundance in this very beautiful country, St. Kitts and Nevis,” said Prime Minister of St. Kitts and Nevis, the Right Hon. Dr. Denzil L. Douglas at the ground breaking ceremony, which was followed by heavy equipment clearing the land..

“Local engineers, technicians, and workers will be involved in the construction of this important facility, thereby ensuring vital technology and skill transfer to Kittitians and Nevisians alike,” said Prime Minister Douglas, who added that upon completion, the solar farm will be fully owned by SKELEC.

“The energy generated here will be infused into the national grid, and this will reduce SKELEC’s need for imported fossil fuels. This farm will reduce the amount of carbon dioxide that St. Kitts and Nevis pumps into the atmosphere. It will move forward our country’s determination to transform St. Kitts and Nevis into a green and sustainable nation. It will reduce the cost of energy and it will reduce the cost of electricity for our consumers,” Prime Minister Douglas told invited guests at the groundbreaking ceremony at Needsmust Estate opposite the Eastern Caribbean Central Bank (ECCB).

Prime Minister Douglas said it is the first of two more solar farms which will be constructed and together will generate one megawatt of power for St. Kitts.

“The second farm will, in all likelihood, be located in the rural parts of St. Kitts, and my enthusiasm over this first farm getting under way is directly linked to the knowledge that a second farm is also sure to follow,” said Dr. Douglas, who emphasized this his progressive Government has changed the way St. Kitts and Nevis lights its streets.

“It has changed the way that St. Kitts and Nevis, their consumers light their homes and bring electricity generally to their appliances that they use in their homes. This government as you would have been reminded earlier, we have changed the lighting of our streets in St. Kitts and Nevis and the lighting of our homes by the distribution of LED bulbs and by solar lighting,” he said.

He further emphasized that this tremendous development that is taking place with regard to renewable energy is his government’s way of showing that it has broken oil’s 100% hold on the economy.

He was of the view that St. Kitts and Nevis no longer will read of how renewable energy can change the economic and developmental prospects of a nation.

“We will be able to demonstrate it here in St. Kitts and Nevis. Our children attending schools, will no longer read of this in text books and look at it on television sets, they will be able to visit this farm physically or go to the Robert Llewellyn Bradshaw International Airport and physically see for themselves the transformation that is taking place with regard to energy. They will be able to visit our sister island of Nevis and go and look at the windmills as they turn and as the turbines thus generate the electricity for the benefit of the people of Nevis as we expect eventually, this benefit as well for the people of St. Kitts,” Dr. Douglas said.

“It is a perfect example of your government’s competence; and a perfect example of our governments’ propensity for hard work; and our own ability to focus and deliver; deliver on real progress and real change for the benefit of the people of St. Kitts and Nevis. For all of these reasons, and because of the tremendous benefits that this solar plant will bring to the people of this Federation, my Government is especially pleased to be taking yet another huge step to ensure that in both islands of St. Kitts and Nevis as will be indicated on the solar panels once this farm is completed we ‘Go Green!’ he declared.