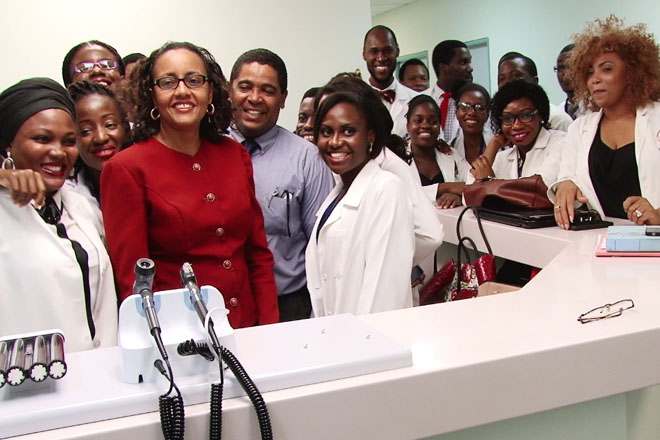 Basseterre, St. Kitts (SKNIS) — The importance of corporate social responsibility was emphasized by Minister of State with responsibility for Health Honourable Wendy Phipps, at a recent handing over of medical equipment by Windsor University.

The equipment which was donated for use in the Joseph N. France (JNF) General Hospital included otoscopes, ophthalmoscopes, a fetal monitor, a portable Electro Cardiogram (EKG) machine and a lamp for pelvic examinations. The money was raised at a benefit concert.

Minister Phipps acknowledged the importance of the contribution and recognized “the investment that the private sector, various members of the community and the general health corps would have made in terms of buying tickets.” She further noted that partnerships between the private sector and government was key to the future development of St. Kitts and Nevis while making reference to Prime Minister Dr. the Honourable Timothy Harris’ presentation at the Citizenship By Investment (CBI) Consultation held July 30.

“We will no longer be having such in-depth concentration in terms of citizenship being tied only to the tourism industry because there must be other investments that will bring legacy and heritage to the people of St. Kitts and Nevis,” Minister Phipps noted in agreement with Prime Minister Harris. “Whether it’s partnership in the health infrastructure, partnership at the social level in terms of housing, or improvement in the general well-being and condition of our people in St. Kitts and Nevis and at the same time, we can, as a result of those joint initiatives, raise the standard of living in St. Kitts and Nevis and by extension the Human Development Index.”

She emphasized that she “appreciated the gesture [by Windsor] on behalf of the government,” and the efficiency it enabled such as the diagnosis of illnesses in quick time.

JNF Medical Chief of Staff Dr. Cameron Wilkenson more specifically encouraged corporate contributions to give to the health sector. He invited as many businesses as had the desire, to take part in the annual concert.

Permanent Secretary in the Ministry of Health Andrew Skerritt voiced his gratitude for the contribution, noting the success of the concert and his ministry’s willingness to collaborate.

“It is important that we push these initiatives, where we partner with persons to really assist the Ministry of Health,” he said. “When we work together we achieve greater things like this.”

Past President of the Rotary of St. Kitts Patricia Mourillion also donated a wheel chair which would be used in the Operating Theatre.