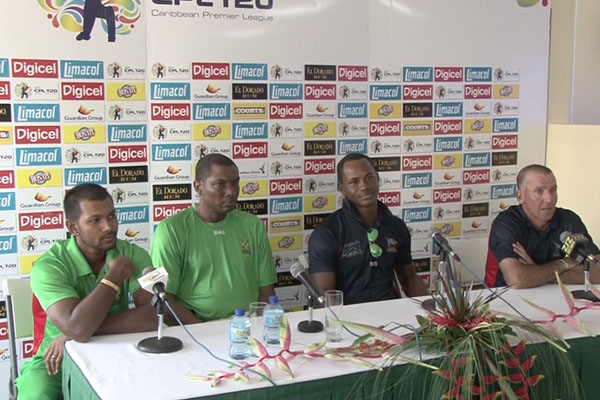 CPL players excited to be in St. Kitts

Basseterre, St. Kitts (SKNIS): St. Kitts and Nevis has received a thumbs up from team officials as matches for the Limacol Caribbean Premier League (CPL) T20 enter a critical stage of the competition.

Three of the top four teams vying for an automatic spot in the finals take the field at the Warner Park Cricket Stadium tomorrow (August 07) with a doubleheader featuring the Guyana Amazon Warriors versus the Antigua Hawksbills and the Trinidad and Tobago Red Steel against the Barbados Tridents.

“The players are excited about being in St. Kitts and being part of not only the two remaining matches (on their schedule) and are looking forward to the playoffs. Everyone is enthusiastic and rearing to go,” said Roger Harper of the Guyana team. Head Coach of the Antigua squad Tim Nielsen agreed and stressed that “St. Kitts is a great way to finish off the tournament.”

Red Steel’s Coach Simon Helmot spoke about the conditions faced at tournament venues across the Region and said matches at Warner Park will be interesting.

“Looks like it will be a great wicket and a fantastic ground for T20 cricket,” he stated, adding that it is shaping up for “a fantastic finish to the competition.”

The Trinidad and Tobago Red Steel and the Jamaica Tallawahs are tied atop the points table with 12 points each followed by the teams from Guyana and Barbados with eight points each. The St. Lucia Zouks are ranked fifth followed by the Antigua Hawksbills.