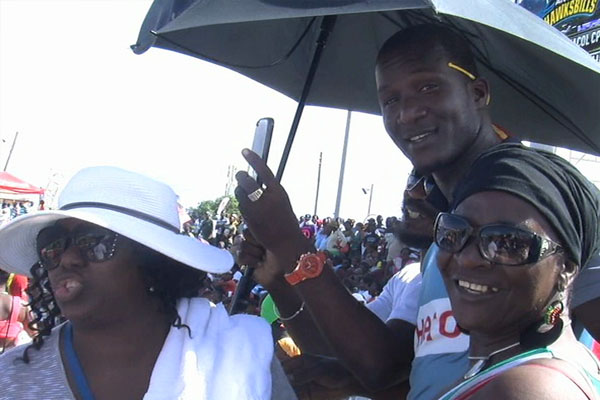 ZIZ News — It was another festive day at Warner Park, as the Caribbean Premier League produced two huge upsets on Saturday.

In the first match, Andre Fletcher and newcomer Kevin Pietersen lifted the St. Lucia Zouks over defending champions Jamaica Tallawahs. It was St. Lucia’s second victory of the tournament.

Then the Antigua Hawksbills team picked up its first win in the tournament after defeating the Trinidad And Tobago Red Steel by five wickets. It was Trinidad’s second consecutive loss.

However, the loud and energetic crowd at Warner Park was in for a treat as some of the games top players entered the grounds to interact with them.

Captain of the St. Lucia Zouks, Darren Sammy was the most social of them all. After picking up their second win, Sammy went into the crowd where he shared an umbrella with several fans before signing dozens of autographs and posing for pictures.

Dwayne Bravo, captain of the Trinidad And Tobago Red Steel and the leader of the Antigua Hawksbills, Marlon Samuels also got into the action of socializing with the fans.