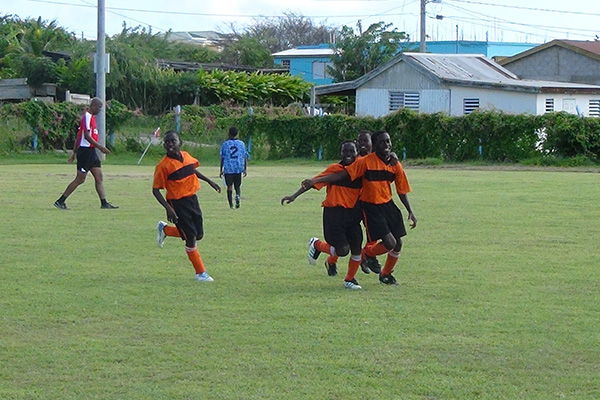 It was almost as if it was the grand finals.  It was the biggest crowd yet at the Primary School Football championship and this particular game was billed as a very crucial one to the eventual overall point standings.

The match was played on Friday 15th November at the Bath Village Playing field and the supporters for the Maude Cross Preparatory School and the Charlestown Primary schools, were out in the numbers.  They were not silent either.  They cheered loudly for every good defensive and offensive move. As a matter of fact, they seemed to be cheering for everything.

When the final whistle blared, the score was 1 goal to nil in favour of the CPS team and they celebrated in style.

However, Coach Elquemedo Willet was still very cautious.  ‘I am not sure that we have done enough to win overall but we will wait and see,’ he said.

In other matches played on that same day

In the lone match played on Monday 18th November, Ivor Walters Primary got the better of VOJN, 2 goals to nil in a hard fought game in the B division.

The final game of the exciting tournament will be held today Tuesday 19th November when Ivor Walters Primary and Elizabeth Pemberton Primary face off in a B division clash.

The closing ceremony is slated for  Monday 2nd December.

Here is a summary of the matches played  on Friday 15th and Monday 18th November:

Game: divi.B IWPS vs VOJN
Score: 2-0 for IWPS
Goals: 1 each for Damari Mitchell and Jaheem Bartlette