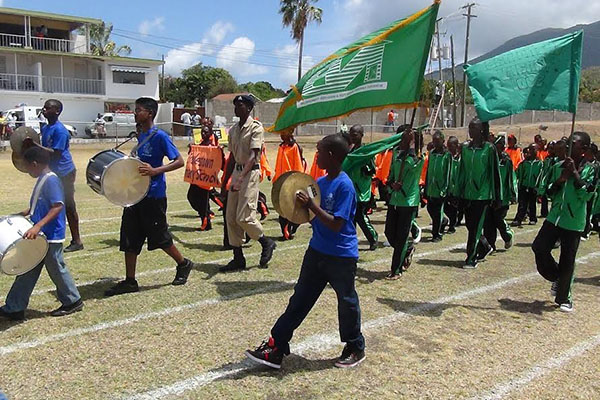 Announcer Rudy Browne called it right.  ‘Last year we had a tie but this year it’s only jackets.’

He was speaking to the comprehensive win by the Charlestown Primary School in this year’s Gulf Insurance sponsored Inter Primary Schools championships, also dubbed ‘the mini Olympics.’

The meet was held at the ET Willet Park on Wednesday 2nd April under the patronage of former champion athlete, Kasheba Daniel.

The troops were then inspected and formally introduced to the officials who included Premier of Nevis, Hon Vance Amory; Federal Sports Minister Hon Glen Phillip; Hon Hazel Brandy –Williams; officials from the Ministry of Sports and the Ministry of Education, the Patron, Kasheba Daniel and officials from main sponsors Gulf Incurrence Ltd.

Most of the speakers stressed on the overriding theme of ‘everyone is a winner’ and charged the athletes and their supporters to abide by that theme during the course of the meet.

The competition was fierce on the track and the first three races were won by schools with smaller rolls and there seemed to be an upset in the offing.

However, true to form, the joint champions both pulled out all stops to place first and second respectively.

There were many highlights of the day but standing out would be Carlon Tuckett winning gold in his attempt to break Kieran Powell’s 200 meters record and pumping his fists in jubilation; Dejal Myers saluting to the crowd and later doing the ‘Usain Bolt’ signature victory style; Jean and Pat in their creative costume attire, affectionately referred to by Announcer Chesley Davis as ‘Pop and Toot,’ Headmaster Kevin Barrett of the winning CPS school, bowing as he allowed head Coach Elquemedo Willet the privilege of taking the winner’s trophy and Prime Minster Dr. Denzil Douglas touring the Park with his entourage and drawing loud cheers wherever he went, as individuals lined up for photo opportunities.

The overall results were: