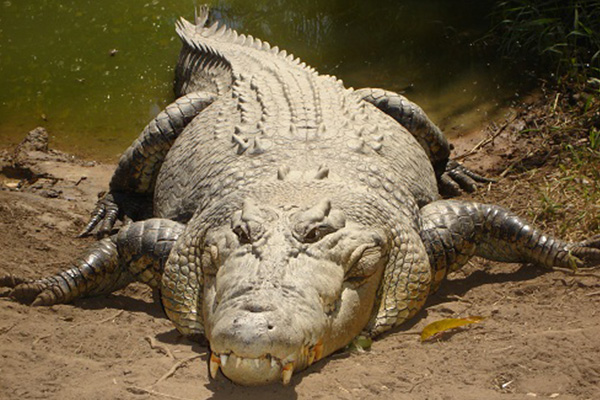 DARWIN, Australia (AP) — Rangers resumed hunting Monday (local time) for a 13-foot crocodile that snatched a 12-year-old boy and mauled his friend as they swam in a water hole in a popular Outback tourist destination in northern Australia.

The missing boy was taken by a saltwater crocodile as he and four other boys swam on Sunday afternoon at Mudginberri Billabong in World Heritage-listed Kakadu National Park, southeast of the Northern Territory capital of Darwin, Police Sergeant Stephen Constable said.

Moments earlier, his 12-year-old friend was mauled as he fought the crocodile and sustained deep wounds to both arms, he said.

“One boy fought off the crocodile, and then the crocodile turned and took the other boy,” Constable told Australian Broadcasting Corporation radio.

The missing boy is from the small Aboriginal settlement of Mudginberri, west of the uranium mining town of Jabiru.

Police and park rangers searched with spot lights for the crocodile and boy by land and boat into Sunday night. A fresh team of searchers resumed the hunt after dawn on Monday.

Sign posts throughout Kakadu warn visitors not to swim in waterways because of the crocodile danger.

Crocodile numbers have exploded across Australia’s tropical north since the species was protected by federal law in 1971. The crocodile population is densest in the Northern Territory, where Kakadu National Park is located, and is promoted as a major tourist attraction.

A 26-year-old man was killed by a 15.4-foot crocodile last August as he swam across the Mary River, southeast of Darwin.