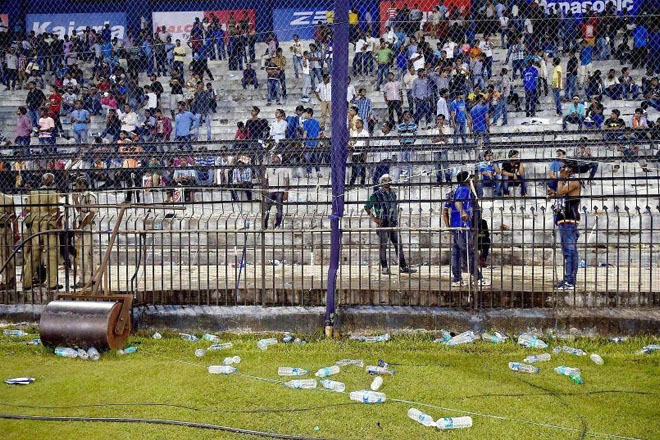 Sports Page — Crowd trouble forced two interruptions in play during the second T20I at the Barabati Stadium in Cuttack as India slid to a six-wicket defeat against South Africa. Play was held up for more than 50 minutes during South Africa’s chase after spectators, largely from one section of the stadium, began throwing plastic bottles onto the field.

The first bottle-throwing incident came in the break between innings – India were bowled out for 92, their lowest T20I total at home – and did not interrupt play. The second came after 11 overs of South Africa’s chase and stopped play for 27 minutes. The players remained in the middle through the delay and play resumed at 10pm, with security personnel lining the boundaries. However, a third wave of bottle-throwing two overs later forced them off. Play resumed after a 24-minute hold-up once the police had cleared the section of the crowd causing the disruption.

South Africa required another 4.1 overs, which passed without further incident, to complete the chase and seal the series 2-0.

The incident is the first case for the BCCI’s new president, Shashank Manohar, to handle and there would be several points of concern for the board in how the situation was dealt with on the spot in Cuttack.

The matter did not come up at the post-match presentation ceremony, though both captains were interviewed by the broadcasters and could have been asked for their thoughts on it.

The issue was raised at the subsequent press conference, however, and prompted this response from India’s captain MS Dhoni: “Frankly, from a safety point of view, I don’t think there was a very serious threat. A few of the powerful people from the crowd were good enough to throw the bottles inside the rope. So the umpires thought it was better that players go off the field for a while. The reaction of the crowd, you know, we didn’t play well, so at times you get reactions like this. It’s only the first bottle. After that they start throwing for fun. We shouldn’t read too much into it.