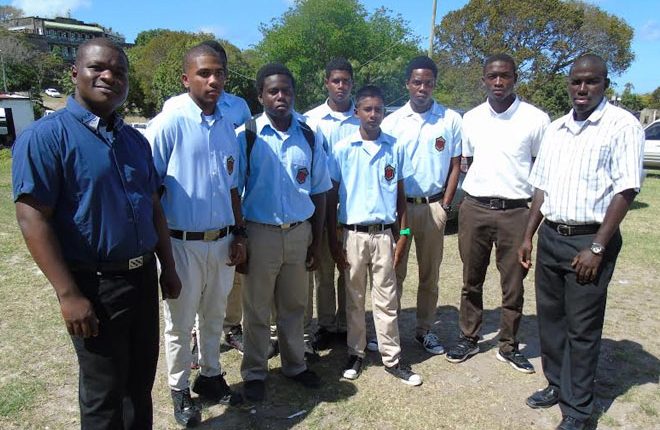 CSS on top of the World

Sports Page — Coaches Fraser and Williams of the Charlestown Secondary school are ecstatic about the school’s recent victory in the finals of the Giant Malt sponsored federation High schools’ cricket championship.

Fraser, in a recent interview, noted that the win makes it three years in a row for the CSS team and even referred to his team as virtually ‘invincible.’

‘I think we need more competition and so we are thinking about making arrangements to play against overseas high school teams in Antigua, St.Maarten and other nearby islands for starters, so that the guys can see how good they really are,’ he said.

Williams noted that the Gingerland Secondary School played their ‘A’ game during the finals.

‘I was really impressed with the way they played. At 97 for 4, they gave us a bit of a scare but Shelton Forbes batted superbly and the others played around him to take us out of the hole,’ he said.

He paid special tribute to the bowling of Adrian Williams who shook up his team in an early spell of seam bowling and the batting of Irvawn Challenger who led the batting for the GSS team.

In terms of the future, both coaches are confident of a bright future for the school team.

They were quick to point out that even though some of the older students will be absent next year, they have a bundle of talented cricketers who cannot wait to get into the team.

As a matter of fact, they pointed out that even though some of the players play for various teams during the local second division competition, that the CSS team is still undefeated in the local league.

It was also pointed out that the team made the finals last year versus a powerful Four Seasons team and gave them a run for their money.

‘The young guys even want to be competing at the first division level. They are that confident,’ said Fraser.

A special ceremony is being scheduled for Friday 1st May during the morning assembly for the school, when the sponsors and members of the organizing committee of the competition, are due to visit the school to hand out trophies and medals to the winning team.

According to Fraser, that is a moment that the young cricketers are looking forward to with great anticipation.