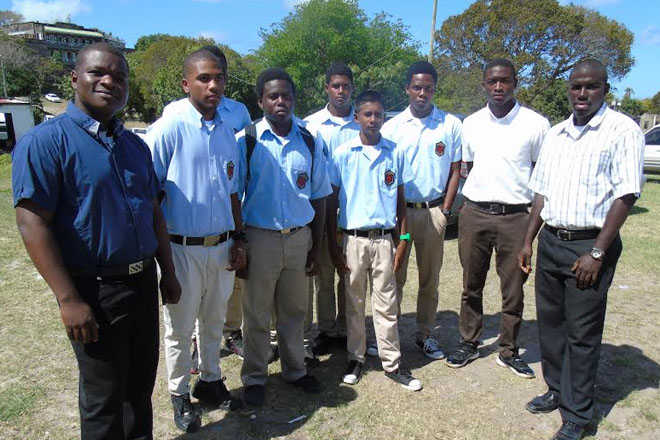 Sports Page — On Friday 24th April, the team members of the Gingerland Secondary School and the Charlestown Secondary School cricket teams, travelled to St.Kitts, to participate in the grand finals of the Federation’s High schools’ cricket championship, which is annually sponsored by Giant Malt.

Many questions were raised as to the chosen venue for the encounter which was the Warner Park Cricket stadium, even though the finals featured two teams from Nevis.

However, the explanation given was that the venue for the finals was predetermined before the two finals teams were decided.

CSS batted first in the day/night fixture which commenced just after 3 pm and were in a little bit of trouble on 97 for 4 with Ross Powell, Saeed Williams and Philo Wallace, all back in the pavilion. The fire power at the time was medium fast bowler, Adrian Williams, who troubled all of the batsmen in his early spell.

Enter Sheldon Forbes and he played a superlative hand, getting to a deserving hundred and in the process, leading his team to an imposing 300 plus runs.

When the GSS team batted, they gave back some of what they received in the field but eventually succumbed to just over 200 runs, to effectively hand the CSS team the coveted trophy.

The summarized scores were not immediately available