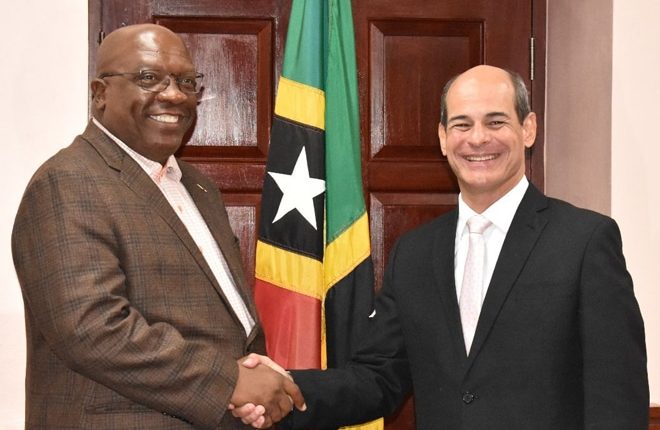 BASSETERRE, St. Kitts, November 19, 2019 (Press Unit in the Office of the Prime Minister) – Deputy Minister of Foreign Affairs for the Republic of Cuba, Mr. Rogelio Sierra Díaz, has expressed appreciation on behalf of his government to the Government and people of St. Kitts and Nevis for their continued support at various international fora.

Deputy Foreign Affairs Minister Díaz was on an official visit to the Federation from November 13-16, 2019. While here, the minister met and held bilateral discussions with Prime Minister Dr. the Honourable Timothy Harris at his Government Headquarters office.

In a recorded address on Friday, November 15, Minister Díaz spoke of Cuba’s commitment towards assisting St. Kitts and Nevis, particularly as it relates to strengthening its human resource.

He said, “Currently, there are 12 Cuban health related staff working in the two islands. At the same time, 37 young men and women from St. Kitts and Nevis are studying in Cuba, and 97 professionals have graduated from Cuban schools. This means that the sister nation is improving its own capacity to further develop the country and is becoming more autonomous.”

Deputy Foreign Affairs Minister Díaz also praised the high level cooperation that exists between both nations, and thanked the Dr. Harris-led administration for its call for the removal of the economic and financial blockade on Cuba.

“Both countries maintain dialogue and political coordination at the highest level and we continue to support each other in multilateral scenarios when discussing vital issues for our countries. Moreover, I had the opportunity to thank the St. Kitts and Nevis authorities for supporting Cuba in the fight against the US blockade,” the Cuban minister said.

On Thursday, November 7, the United Nations General Assembly adopted a resolution calling for an end to the economic, commercial and financial embargo imposed by the United States against Cuba.

While in St. Kitts and Nevis, Mr. Díaz visited several historical sites, including the National Heroes Park, where he laid a wreath in honour of the nation’s five National Heroes.