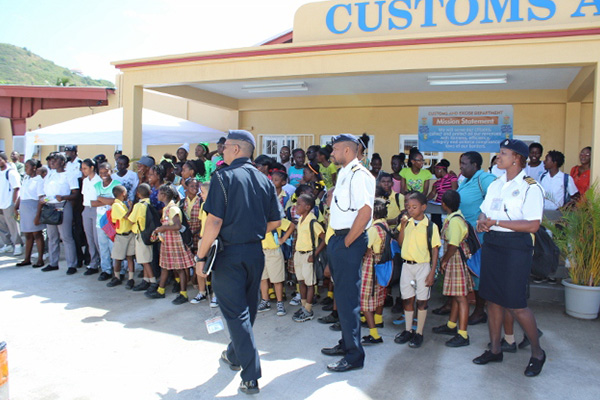 Assistant Comptroller of Customs and Chairman of the Customs Week Committee, Mr. Theodore Brown, said the success of the week was the direct result of the involvement and commitment of the staff in thoughtful preparation and meticulous implementation. “The week reminded us as officers that we are servants of the people and that we must keep the lines of communication open to build and maintain trust and teamwork,” Brown said.

The week was celebrated in both Divisions of the Department on St. Kitts and on Nevis with the support of the leaderships of the Ministries of Finance of the Federal Government and the Nevis Island Administration. It also included church services, talks in schools, an officer exchange day and a panel discussion.

The highlights of the week were the open day events on Thursday (Jan 30) at the Customs Headquarters at Bird Rock and Long Point, where members of the community visited and toured the facilities and were brought up to date with the ways in which Customs procedures facilitate national growth and development. On St. Kitts, the canine team was put on display to the entertainment and edification of visitors, while on Nevis a display was mounted outlining the leadership of that division over the years.

Also of significance were the Community outreach projects where the Nevis Division reached out to the residents at the St. George’s and St. John’s Senior Citizens Home and the joint meeting of the management of the St. Kitts Division with the leadership and membership of the St. Kitts and Nevis Chamber of Industry and Commerce.

Management of the St. George’s and St. John’s Senior Citizens Home applauded the outreach effort as a really good gesture. “Both the residents and officers appeared to enjoy this experience and it shows that Customs genuinely cares,” one manager of the facility said. “This outreach effort should be continued more than once per year and other government departments should follow,” the homecare expert concluded.

Meanwhile the Chamber membership acknowledged the St. Kitts and Nevis Customs and Excise Department as “one of the most progressive departments in the region” which in a “professional and efficient” manner is “accommodating and facilitating” to the trade sector.

The department outlined its customs reform plans for 2014 which includes the implementation of the ASYCUDA World platform for the electronic submission of all import and export related documents and payments.

The meeting with the private sector stakeholders concluded with a common understanding by both groups and with commitment by the department to include employees of the trade sector in its ongoing training initiatives.

Customs Week which was celebrated under the theme “Communication: Sharing Information for better Cooperation” ended on Saturday February 1, 2014.