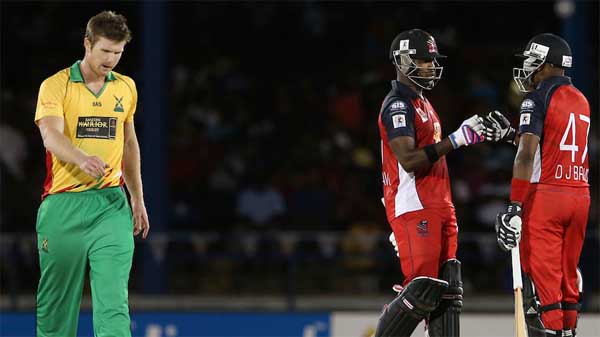 (Sports Page)— At 13 for 3 in the fourth over, chasing 180, the chances of a Trinidad & Tobago Red Steel win were looking unlikely. It took an impressive 131-run, fourth-wicket partnership between Darren and Dwayne Bravo and a last-ball six from Darren to help Red Steel seal off a remarkable win against Guyana Amazon Warriors.

With 167 needed at the start of the fifth over and the required run rate already over 10, Red Steel did not have the luxury of playing out a few overs to consolidate. The Bravo brothers, however, paced themselves well, finding the boundary in nearly every over.

Amazon Warriors made one change to their side from the last game, bringing in offspinner Steven Jacobs for Sunil Narine. Jacobs ended up conceding 28 runs in his two overs. His second over, the ninth of the innings, cost 20 runs and marked the turnaround of the chase. Between the ninth and 13th overs, the Bravo brothers went on to hit 71 runs, dragging the equation down from 143 off 72 to 72 off 42. The fifty-run milestone in their partnership had taken 40 balls but the next fifty runs came off 18 balls.

Amazon Warriors would have hoped the wicket of Dwayne Bravo to put the brakes on the chase, but a couple of sixes from Nicholas Pooran before his dismissal in the 19th over, kept Red Steel in the hunt. With nine needed off the last six balls, Ronsford Beaton, who had bowled the most expensive over of the innings, almost redeemed himself, giving away two runs off the first four deliveries. However, Jason Mohammed turned the strike over to Darren Bravo off the penultimate ball and the batsman, well-set on 63, slammed the last ball for a towering six over deep midwicket.

The Amazon Warriors innings had the same pattern as the Red Steel one; early wickets, a large partnership and quick runs at the end.

Samuel Badree finished his first spell with figures of 3 for 6 off three overs, dismissing Martin Guptill in the first over and then taking the wickets of Mohammed Hafeez and Lendl Simmons, after Simmons had taken 16 runs off Fidel Edwards in the fifth over.

Denesh Ramdin and Neesham took contrasting routes in their 122-run fourth-wicket partnership. Neesham relied mostly on singles, while Ramdin found the boundary shots more often. The Amazon Warriors captain raced to his fifty off 33 balls and the pair stepped up the scoring accumulating 82 runs between the 13th and 18th overs. Christopher Barnwell slammed two sixes and a four in his eight-ball 23 to set up a strong finish for Amazon Warriors.