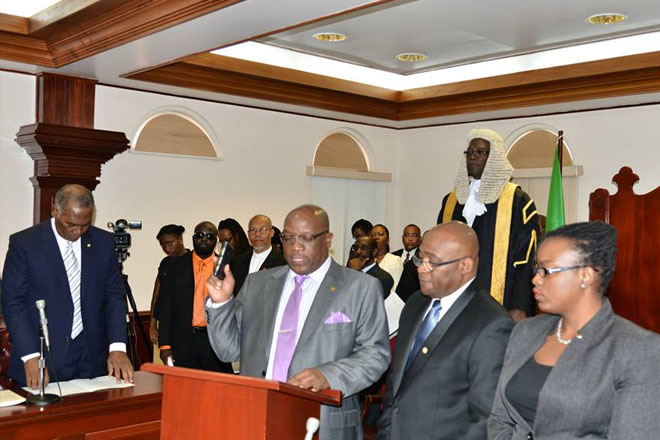 Basseterre, St. Kitts (SKNIS) — Prime Minister, the Honourable Dr. Timothy Harris, led the government of national unity into the St. Kitts and Nevis National Assembly, for its opening session on Thursday (May 14) and ushered in the commencement of what he calls the “restoration of good governance” for the federation.

“Decorum, Respect, Order, these are going to be the new values for which the honourable chamber will become beholding to. These are necessary if we are going to instill that new thrust in new governance and into all aspects of public life,” stressed the Prime Minister.

Prime Minister Harris further stated, “this is a government that was elected by the people, and we want to ensure throughout our tenure both in government and in this parliament, we conduct ourselves in a manner that continues to hold the confidence of all the people of St. Kitts and Nevis.”

The Prime Minister also took time to reflect on the wide cross section of invited guests who were present in the National Assembly chambers and on Church Street, and used the opportunity to announce the government’s desire to establish a separate building to house the national assembly in the future thus allowing for maximum participation by the general public.

Prime Minister Harris also thanked supporters for their confidence by electing the government of national unity.