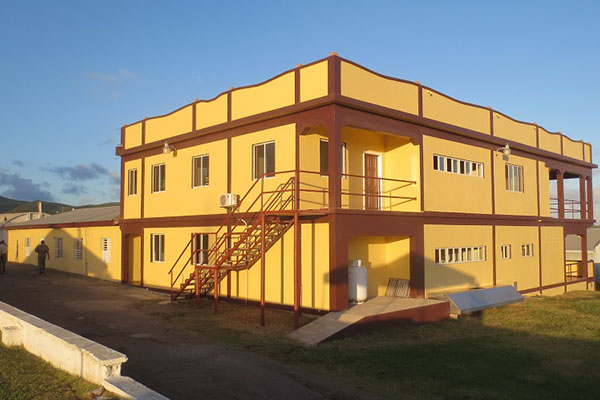 (ZIZ)– The St. Kitts And Nevis Defence Force on Tuesday held an official opening ceremony for a newly constructed facility at Camp Springfied.

Public Relation Officer for The Defence Force captain Kayode Sutton says the building’s completion is an unprecedented demonstration of inter-agency support between the Defence Force and inmates of Her Majesty’s Prison.

“Of course we were able to identify that we could have inter-co operational support that could help to serve national interest such as the one established between Her Majesty’s Prison and the soldiers,” he said.

Captain Sutton says the construction of the building will result in many benefits including ensuring the comfort of soldiers and the better housing of visiting military personnel.

“It also elevates the living standards of every soldier and it helps to improve the readiness of the force.  It’s a recruiting point for future generations of the Defence Force because when you see the facilities, which is one of the few things the defence force has planned for development, you see a good facility for the organization that you want to be a part of… it tends to appeal to those persons who want to come in,” he said

The building house the soldiers barracks, training room, utility rooms, a reading room and a state of the art industrial kitchen

Among the guests at the building opening ceremony were the Governor General, His Excellency Sir Edmond Lawrence, Prime Minister The Rt Hon Dr. Denzil Douglas, other government officials and specially invited guests.