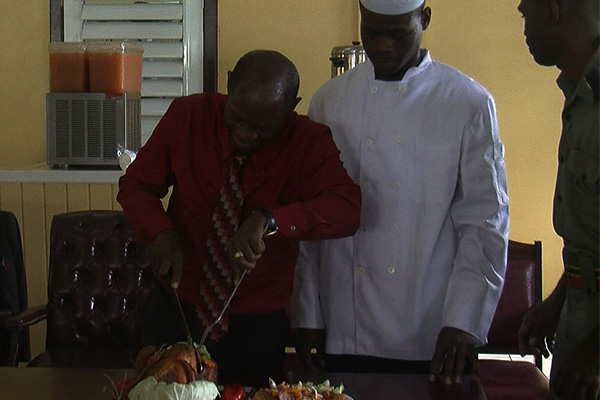 The St. Kitts Nevis Defence Force continued its annual tradition on Tuesday where the prime minister and senior officers showed gratitude to the soldiers by serving them Christmas lunch.

It’s a yearly event where the soldiers get a chance to sit back and be served by the higher ranks.

In his address to the soldiers, Prime Minister the Right Hon Dr Denzil Douglas said this is their way of saying thank you for their service.

“You have served well for the entire 2013 and before it is now a time for me as the Prime Minister to show our gratitude as a government and participate in the ritual today as we serve you,” he said.

He also noted that their expertise will still be needed now that the carnival season is in full swing.

“The normal routine of our country will be changed, as is always at this time of the year.  And so your professionalism, your maturity and your sense of responsibility will be particularly important,” he said.

Prime Minister Douglas carved the turkey and presented the first plate to Corporal Joseph Bergan who was shot while on duty in December 2005.