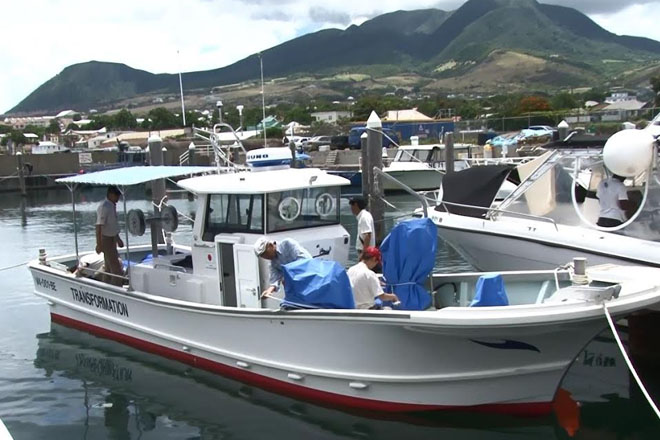 (SKNIS): In a brief ceremony today, a representative from NBK Corporation out of Japan, handed over the keys to the fishing vessel “FV Transformation” to the Department of Marine Resources. The fishing vessel will aid in conducting training for fishermen/women, performing marine research, as well as carrying out surveillance activities within the marine waters.

The ceremony took place at the Basseterre Marina where Minister of Agriculture, Honourable Eugene Hamilton, revealed that one year ago in Antigua, while at a meeting for Ministers of Agriculture and Fisheries, along with Director of Marine Resources, Mark Williams, he was able to secure a grant within the vicinity of US $1.5 million from the Government of Japan. The fishing vessel “FV Transformation” is part of this grant. Minister Hamilton said that the fishing vessel forms part of the project that the Government is embarking on to improve its marine/fisheries resources. Other marine resources to be received by November of this year as part of the grant include freezers for both fishing complexes in St. Kitts, power saw for cutting fish, and a freezer truck to transport fish across the country which will include Nevis if necessary.

“I am happy that this boat is here,” said Minister Hamilton. “I want to thank the Government of Japan for its contribution to the development of fishing in St. Kitts and Nevis. I want to encourage those who will use this boat in the conduct of their daily work, complementing the Fisheries Department, to ensure that they take good care of it, and that from their efforts the country will benefit.”

Mr. Williams, Director of Marine Resources, said that during this week, June 13 to 17, the staff at the Department of Marine Resources was trained in the operation and maintenance of the boat. Two captains were also trained; one will be there full time and the other will come in on a needs basis.

The fishing vessel is equipped with a modern navigation system that includes radar, GPS, fish finder and radios.