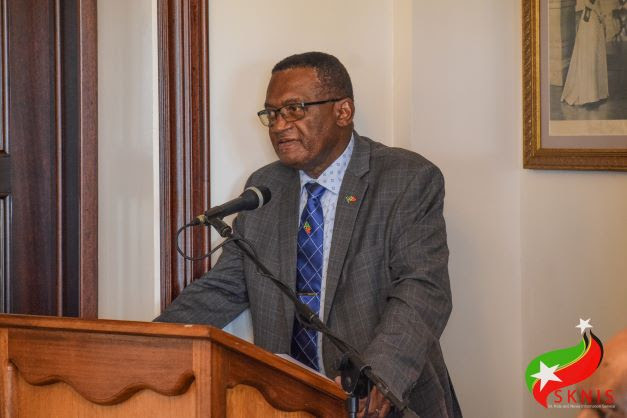 Basseterre, St. Kitts, June 30, 2022 (SKNIS): Deputy Prime Minister, the Honourable Eugene Hamilton, expressed the deepest appreciation on behalf of a grateful Federation to six nationals of St. Kitts and Nevis, whom he described as “outstanding models” to the nation.

“Our recipients today have been part of the machinery used to ensure that the economy keeps thriving, inculcating knowledge to our young people, illustrating to them examples of role models of service and teaching them to strive for excellence in terms of attitude and social cohesion,” Deputy Prime Minister Hamilton stated at the Investiture Ceremony.

“Today, with much exhilaration and satisfaction for the contributions made to our Federation by you, the six worthy recipients of this honour, I say thank you. I say thank you on my own behalf, on behalf of a grateful nation. Thank you for extending hours endured through your service and craft to ensure that our country benefits from your tangible contributions, unparalleled dedication, and wisdom,” he added.

Honourable Hamilton told the Companion Star of Merit recipients along with their family and friends at the ceremony that the country is indebted to the six nation builders. He said that they “did their best to become the best” persons possible and through their efforts, they have “ushered in opportunities for thousands of people so that they too can participate in meaningful nation-building.”

A second Investiture Ceremony will be held on Thursday, June 30, 2022, at Government House. Recipients of the 2021 Medal of Honour will be awarded at this time.

The Companion Star of Merit (CSM) and the Medal of Honour (MH) fall under the National Honours Awards. These are two of the highest civilian honours that the Federation of St. Kitts and Nevis bestows on its sons and daughters. The highest honour is the Order of National Hero.