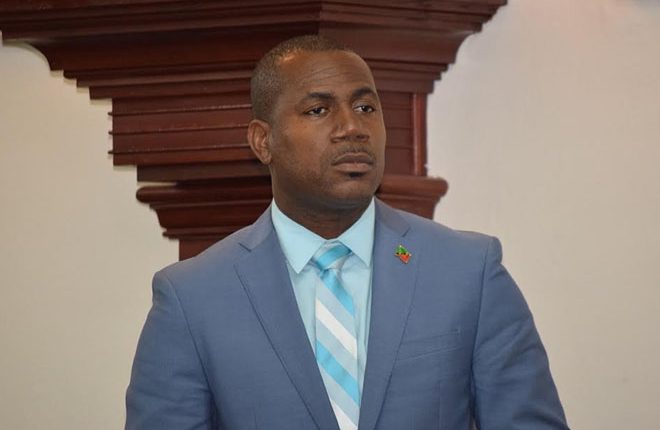 The Deputy Prime Minister drew on his own personal experience as a victim of gun crime to strengthen his argument that tougher penalties are necessary to help deter individuals from using illegal firearms.

According to a police press release, on the morning of March 10, 2017, multiple shots were fired at the home and personal vehicle of the Honourable Shawn Richards in Sandy Point. The Deputy Prime Minister, along with other family members, was at home when the incident occurred.

While no one was injured during the ordeal, Minister Richards said that had circumstances been different that morning, someone could have been struck by the bullets fired at his home.

“The gunshot, which came through the living room door, penetrated the couch in the living room on the armrest, went through the entire armrest and lodged in the cushion itself for that particular chair. Mr. Speaker, that is a chair from time to time I would lie down in, look at television, persons would come and sit in that chair [and] look at television. Mr. Speaker, had circumstances been different and perhaps I had fell asleep in that chair or someone had been sleeping in that chair that morning, Mr. Speaker, that person would have been the victim of that particular gunshot,” the minister stated.

Minister Richards continued by saying the trauma associated with gun-related incidents remains with the victims for a very long time. He added, “I don’t think I’ll ever be comfortable lying down in that chair and sleeping in that chair because of what would have happened. Each time you step out of your house, you’re very alert. Each time I get home, I’m very alert because that has been an experience – an experience that you never forget.

The Honourable Shawn Richards, who serves as Minister of Education, Youth, Sports and Culture, said it is for that reason, first and foremost, why he strongly supports the Firearms (Amendment) Bill, 2017.

“I cannot come in here and not support this particular piece of legislation,” Minister Richards stressed. “I have spoken about my own lived experience, but what of other persons out there who have actually been the victims of gunshots in terms of being hit, Mr. Speaker. I am certain Mr. Speaker that this legislation brings some level of comfort to those persons knowing that the penalty is to be increased.”

The deputy prime minister further noted that this piece of legislation, by itself, is not the solution to the country’s crime situation, “but we are saying to those who have been caught with illegal firearms that you must pay the price.”