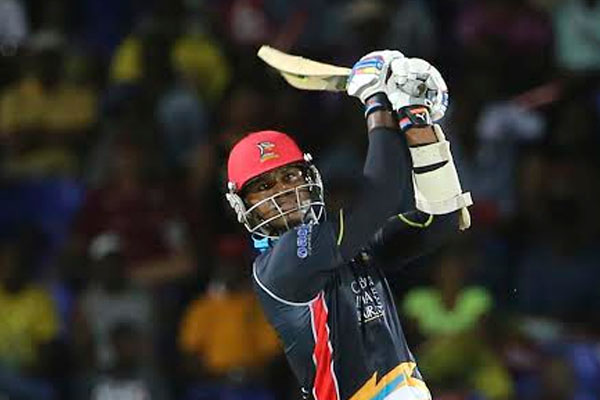 Basseterre, St. Kitts (CUOPM) – Marlon Samuels scored the fastest ever century in the CPL and combined with Orlando Peters for the highest partnership in CPL history, but both accomplishments were recorded in vain as the Antigua Hawksbills lost to the Guyana Amazon Warriors by 19 runs at Warner Park in St. Kitts.

ESPNCricinfo reports that the Hawksbills fell to 0-8 on the season and have one game remaining, against Trinidad & Tobago Red Steel, to see if they can avoid the ignominy of being the only team to finish winless in CPL 2014.

The Amazon Warriors authored a record of their own by becoming the first team in CPL history to score 200 in an innings, eventually finishing on 212 for 5 after being sent in to bat. However, that mark could tumble a few more times prior to next weekend’s tournament final thanks to the short boundaries at Warner Park where replacement balls were needed early and often for the number of deliveries that were smashed over the ropes and out of the stadium. A total of 27 sixes were registered in the match.

The Hawksbills frustrating season may be best encapsulated by the seventh over bowled by Miguel Cummins, who overstepped on four consecutive deliveries to begin the frame. The first legal ball was smashed for six by Martin Guptill, who had already hit Cummins’ third no ball for six earlier in the over. On what should have been the second legal ball, Cummins overstepped again with Guptill taking a single to make it 19 runs off only one legal ball in addition to five no balls. Guyana ended the 23-run over on 75 for 2 and their run rate never dipped below 10 runs per over for the remainder of the innings.

Man-of-the-Match Guptill powered the Amazon Warriors innings by making 90 off 51 balls, including seven fours and six sixes. He teamed with Captain Denesh Ramdin to add 114 for the third wicket as Ramdin also did his share of damage with 51 off 34 balls. Guptill fell midway through the 17th over but there was little reprieve for the Hawksbills attack as Christopher Barnwell cracked four sixes of his own in the final overs and finished unbeaten on 37 off 20.

David Hussey was moved up the order to open with Ben Dunk in a bid to get the Hawksbills off to a quick start but the move failed to pay off with Dunk going for 3 off 6 balls and Hussey falling in the fifth over for 13 off 14 to make it 31 for 2. Danza Hyatt’s miserable CPL continued when he was dismissed for a duck in the sixth over by Veerasammy Permaul thanks to a fantastic one-handed leaping catch by Jimmy Neesham in the covers.

It was at this stage that Peters joined Samuels at the crease and they would not be separated for the rest of the game, adding a CPL record 161-run unbeaten partnership. Peters ended on 67 off 45 balls but it was Samuels who stole the show with an extraordinary display of clean hitting. He brought up his 50 in 29 balls in the 12th over but immediately called for treatment to wrap up what appeared to be a left groin strain. Samuels’ injury resulted in his only being able to take the safest of singles when sharp running was needed to keep pressure on fielders.

His second fifty was scored in just 21 balls, despite eight of those deliveries resulting in no runs off the bat, thanks to three fours and six sixes struck in that stretch. The effort might have been good enough for an improbable win had it not been for Sunil Narine, who stunted Antigua’s momentum at every opportunity during a brilliant spell of 4-1-16-0 in a match where most other bowlers were punished.

Antigua entered the final over needing a mathematically impossible 42 runs to win. Samuels hit sixes off the first three balls to bring up his century off 50 deliveries and raised his bat in sheepish fashion. It was a silver lining to the Hawksbills dire 2014 campaign but not enough to change the stoic, forlorn expression from the face of Hawksbills team mentor Sir Vivian Richards.