Basseterre, St. Kitts, March 12, 2019 (DBSKN) — Directorate, Management and staff of the Development Bank of St. Kitts and Nevis have recently bid farewell to two long-serving members of staff who have retired after a combined total of sixty-six (66) years of dedicated service.

A farewell party was held on Thursday February 28 at the bank’s premises at the corner of Church and Central Streets in Basseterre for Ms Marian Browne who had joined the Development Bank of St. Kitts and Nevis in July 1984 as an accounts clerk. She retired as the institution’s Chief Compliance Officer.

This was a follow-up to an end of year staff dinner held on Saturday December 22 last year at the St. Kitts Marriott Resort, where the Directorate, Management, and staff of the bank officially bade farewell to Ms Marian Browne and to Ms Veronica Arthurton, a dedicated staff member at the Nevis branch office who had joined the institution in 1986.

Present at the staff dinner was the Chairman of the Board of Directors, Mr Warren Thompson, who together with the bank’s CEO Mr Lenworth Harris, presented the two retiring employees with tokens of appreciation.

“We really want to express our profound appreciation for the time that you have been with the bank and the values that I hope you would have been able to pass on,” Mr Harris told Ms Browne at the farewell party. “She has tried in every way to make each and every one of us a better person and by extension hopefully a better employee.”

Mr Harris noted that Ms Browne was a likeable person who cut the image of a mother-figure to the bank’s younger employees, while she was the un-official spiritual leader at the institution based on her background as a lay preacher in the St. Kitts circuit of the Methodist Church.

“I have enjoyed being with you guys over the years; sometimes it is up, sometimes it is down, but I recognise that we are all one – one happy family,” said Ms Browne at the farewell party that was organised by the bank’s Human Resource Department. “The word I want to leave with you is to remember that we are a serving institution and without persons coming through the door we have nothing to live on.”

The sentiments expressed by Ms Browne had also been echoed by Ms Veronica Arthurton in her farewell speech at a staff gathering at the Nevis Branch office on Friday December 28 last year. She promised to continue encouraging people to come to the Development Bank of St. Kitts and Nevis to take loans to build a house, buy a car, start a business, or even for further education. 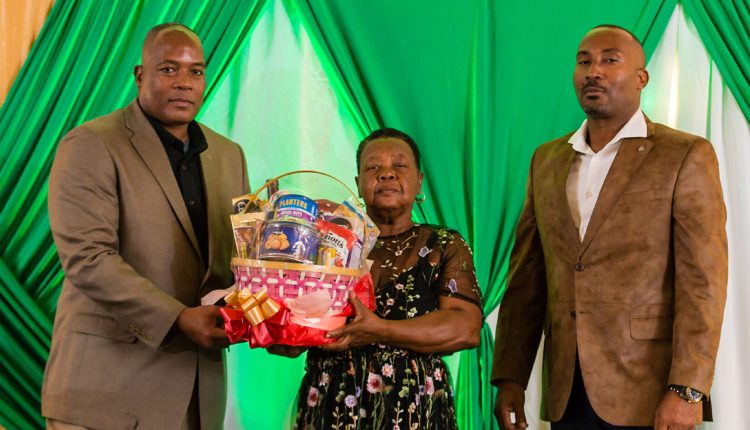 CEO of the bank, Mr Lenworth Harris, presents a food basket to Ms Veronica Arthurton, as Chairman of the Board of Directors, Mr Warren Thompson, looks on. 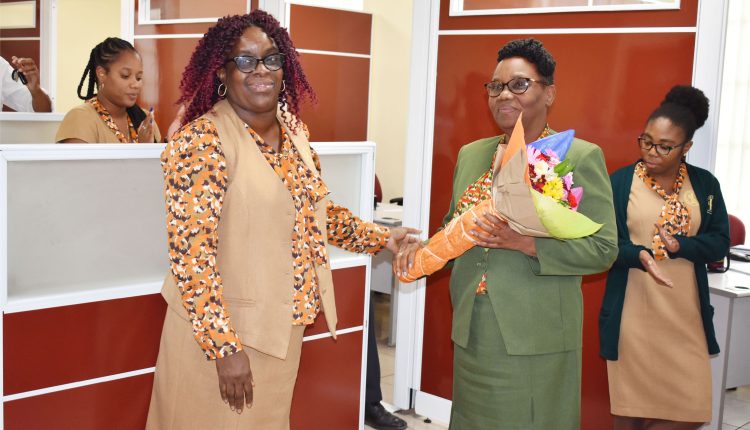 Staff member Ms Erselyn Vanterpool (left) presented a bouquet of flowers to Ms Marian Browne on behalf of the bank’s management and staff.
Prev 1 of 2 Next
Continue Reading
Share
You might also like
National