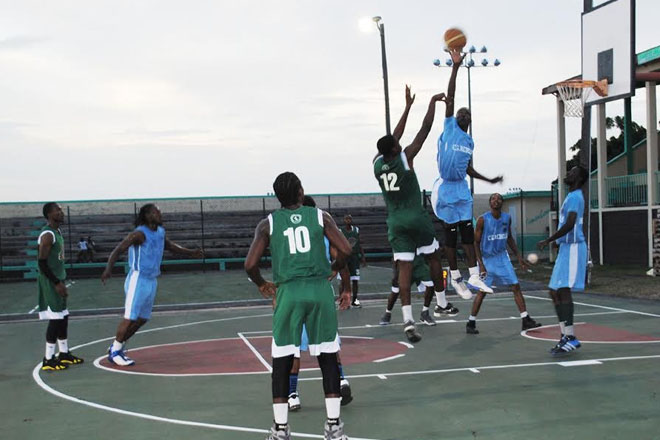 Playing in a sporting facility devoid of spectators, save for two toddlers on the western side bleachers who kept on shouting ‘Daddy play’, Cotton Ground Rebels who are the former SKNABA Premier League finalists literally snatched defeat from the jaws of victory, having had the game in control right into the third quarter but allowed the boys from across the Narrows to edge them out 60-64 at the final whistle.

The game started on a fast pace, but scoring eluded both sides for a good five or so minutes, especially the St. Kitts side that raided the opponent’s ring severally led by Taslyn Hodge, Delvin Marshall, and Ansel Revan. The Rebels had an equally frustrating time until about the sixth minute when Justin Jeffers drew the first blood by scoring two points.

At end of quarter one, Cotton Ground Rebels were firmly in control of the game leading 17-9. Development Bank Challengers Exodus was without the services of dependable player Shawn Forbes who suffered shoulder injury from their previous game with Sol Fig Tree Dirt Revellers. They were however consoled by the return of Javal Hodge who was playing for the first time since he suffered a serious ankle injury earlier in the year.

At half time, the game which was refereed by Nevisian Winston ‘Parpa’ Parris and Lewis ‘Gasso’ Browne from St. Kitts, Cotton Ground Rebels were still calling the shots leading 31-22 with their players Kirt Herbert and Royden Browne scoring at will. The two toddlers who were cheering their dad had quietened down probably satisfied their father would go home victorious.

But that was not to be as Development Bank Challenger’s Exodus Team Manager Roger Gumbs, in absence of Coach Jamie Harrigan, held a pep talk with the players who appeared rejuvenated by the talk. At the end of the third quarter they had turned the tables and were leading Cotton Ground Rebels by a point (45-44) and at the end of the game, the boys from across the Narrows had won the game 64-60.

For the vanquished Cotton Ground Rebels, Kirt Herbert had 18 points, five rebounds, seven assists, and one steal; Royden Browne had 17 points, 14 rebounds, and two assists; while Sylvester Matthew had 16 points, two rebounds, and one assist.

Played earlier on the same day (Thursday July 9), at the same venue was the SKNABA Premier League game between Cayon Lions and St. Paul’s Tuff Knots. Lions took an early lead at the end of first quarter by 22-9, and still held on at 39-26 at the end of the second quarter. However the two teams tied 47-47 at end of the third quarter, but Lions used their experience to edge out the Tuff Knots 67-63 at the end of the last quarter.