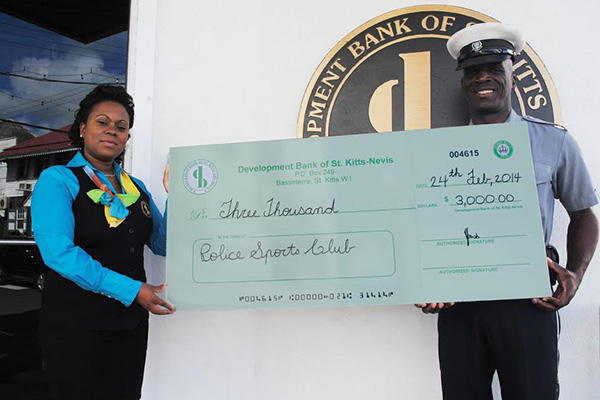 Basseterre, St. Kitts — A cricket team made up of members of the Police Sports Club of the Royal St. Christopher and Nevis Police Force will be in St. Lucia in the period April 16-22 thanks to the Development Bank of St. Kitts and Nevis which has responded to their call for contribution towards covering travelling and related expenses.

A request sent to the Development Bank signed by Assistant Commissioner of Police, Mr Ian Queeley, who is also a player and the manager of the team, had indicated that the sports club had received and accepted an invitation to participate in a Regional Security System (RSS) T20 Cricket Tournament to be held in St. Lucia.

“This is a very costly venture and the Police Sports Club is soliciting assistance by way of a contribution from your institution in the sum of three thousand dollars ($3,000.00) EC to help defray some of these expenses,” said Assistant Commissioner Queeley in the request letter to the Bank’s General Manager, Mr Lenworth Harris.

According to Development Bank’s Manager for Human Resources, Marketing and Product Development Ms Danienne Brin, during the process of consideration it was felt that members of the team will gain useful experience when they meet their regional counterparts and the request was granted.

Constable Percy Daniel, Assistant Secretary/Treasurer of the Police Sports Club, received the sponsorship cheque from Ms Brin on Monday February 24 at the offices of the Development Bank of St. Kitts and Nevis at the corner of Church and Central Streets in Basseterre.

“We are fond of saying that all work and no play makes Jack a dull boy, and while this is true, the society does not see that philosophy being applied to grownups or even members of our police force,” said Ms Brin.

“Officers of the Royal St. Christopher and Nevis Police are hard working people who have done a lot of good for this country as they ensure that the ordinary citizens lead quality lives. This puts them under a lot of pressure and this gesture of going to play cricket with their regional counterparts will be a welcome relief.”

After receiving the cheque, Constable Daniel, who is a retired national and regional cricket player said that he has to come out of retirement (as a cricket player) to do duty for his team when it travels to St. Lucia.

He said that the team has some young and upcoming players who will be bolstered by another notable retiree (from active cricket) Inspector Luther Kelly, and a ‘double retiree’ former Commissioner of Police, Mr Austin Williams, who has agreed to dust off his cricket playing gear.

“This is our first opportunity and efforts for preparation have started, and we feel that we could do fairly well in the competition in St. Lucia,” said Constable Daniel. “We are not familiar with the players who would be taking part, but I feel if we practice well and given the opportunity to execute on the days of the tournament that we would bring the trophy home.”

Apart from playing, he said that this initiative by the RSS which is the regional force, will give them the opportunity to keep in touch with other forces within the region, and he saw that as a form of networking and he was thankful to the Development Bank for coming to their assistance.