Charlestown, Nevis, May 31, 2019 (DBSKN) — The three secondary schools on Nevis participated in the Nevis High Schools’ Basketball Tournament that concluded early in May, and newcomers Nevis International Secondary School (NISS) finished in the third position behind Charlestown and Gingerland Secondary Schools. 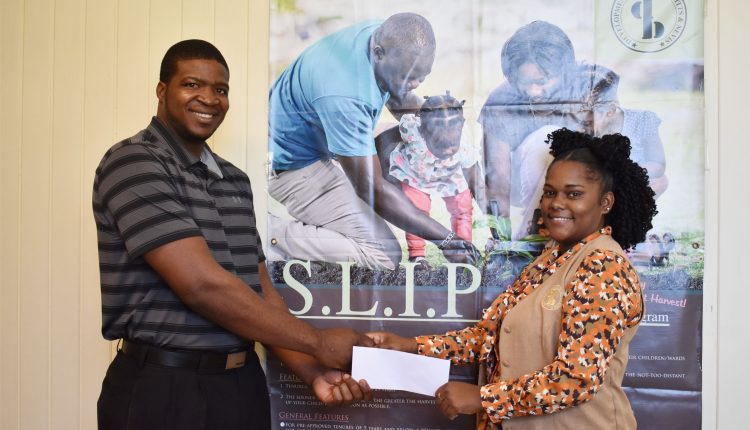 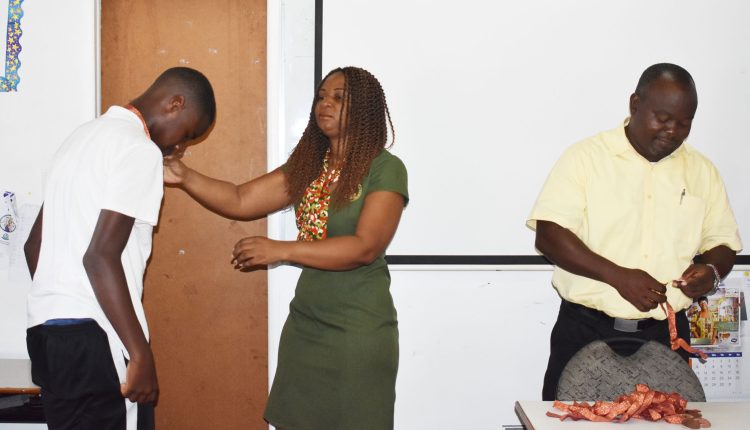 Manager of the Nevis branch of the Development Bank of St. Kitts and Nevis, Ms Hyacinth Pemberton, presenting a medal to one of the players. On the right is Mr Smith.
Prev 1 of 2 Next

Presentations to hand over trophies and medals were held simultaneously on Wednesday May 29 at the winning school and at the third placed school. At the Nevis International Secondary School which had been sponsored by the Development Bank of St. Kitts and Nevis, Mr Raybo Smith represented the Department of Sports, while Ms Hyacinth Pemberton, manager of the Nevis branch of the Development Bank, represented the sponsor.

“NISS did well in the tournament,” said Mr Smith at the ceremony which was also attended by the school’s Principal, Ms Joy Napier. “They tried their best – they did well and we are trying to encourage you guys to keep your heads up, even though you did not make it in the top two. I assure you that with some time and with a proper coach then you will be able to show a little bit more competition. We have seen a number of your players who have potential to do better.”

Mr Smith, who is the Supervisor of Grounds and Facilities at the Nevis Department of Sports, promised the basketball players that the Department will give them a helping hand in terms of having someone to come to the school when it opens in the new academic year to assist them with their basketball programme. He was accompanied by Sports Officer Mr Kimbell Ward.

“We are here this morning, along with your sponsor the Development Bank of St. Kitts and Nevis for a brief ceremony,” said Mr Smith. “Development Bank, whatever sponsorship from the Department that we ask them, my understanding is that we have never been turned down. We have always been accepted, and I think not too far from here we should be starting the softball competition. I understand Development Bank you are still on board.”

Before presenting individual medals to the players, Manager of the Nevis Branch of the Development Bank of St. Kitts and Nevis Ms Hyacinth Pemberton commended them for their efforts in the competition, and encouraged them to continue practicing and to stay at it as in that way, next time they might come out on top.

Development Bank’s sponsorship for the Nevis International Secondary School had been received by Senior Sports Officer Mr Kelvin Bramble in October last year, as plans were to have the tournament take place in November. Due to some unforeseen circumstances, the tournament was held this year and ended early May.

Nevis International Secondary School Principal, Ms Joy Napier, thanked the Department of Sports for promising assistance to the players, and the Development Bank of St. Kitts and Nevis for sponsoring the school’s basketball team that took part in the inter high schools’ basketball league.