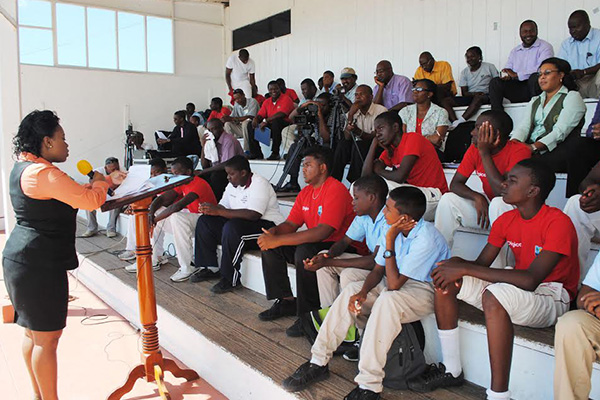 Charlestown, Nevis — President of the Nevis Cricket Association, Mr Keith Scarborough, has commended corporate citizens who came on board to partner with them in the hosting of the new cricket season league and singled out the Development Bank of St. Kitts and Nevis which is the sole platinum sponsor.

“When I decided to take the presidency for 2014, I decided then that something has to be done to revive the game of cricket here in Nevis,” said Mr Scarborough on Thursday February 20 at the Elquemedo Willett Park in Charlestown during the official opening of Nevis Cricket Association’s 2014 season.

He pointed out that for him and the association to achieve that goal, he went about meeting with the various partners, the umpires, grounds men, selectors, Nevis Island Administration, and sponsors and explained that he did it that way as he recognised that it was a collective effort by all involved in the game of cricket.

“I am pleased to say today that unlike last year when we were struggling to get sponsorship, this year a few good corporate citizens have come on board to partner with us, and I wish to say a special ‘thank you’ to the Development Bank of St. Kitts and Nevis who is our platinum sponsor and who have sponsored the first division one day competition,” observed Mr Scarborough.

“Also we have the Four Seasons Resort who we are more than pleased to have come on board to partner with us. We also have Hosfords, TDC, St. Kitts Breweries, Nevis Spring Water, Social Security and of course the Nevis Island Administration, without whom if we did not have their support last year cricket in Nevis would just have died a sudden death because we were very low on cash.”

Representing the Development Bank of St. Kitts and Nevis at the official opening ceremony was its Manager for Human Resource, Marketing and Product Development Ms Danienne Brin who said that after Mr Scarborough contacted them, they agreed to come on board as the association had indicated to them that it intended to focus on the development of the youth.

“Our people constitute the country’s most important resource and at the Development Bank we believe in developing this resource from an early age,” said Ms Brin, who was accompanied by Mrs Jean Alcendor-Browne, the Bank’s Credit Risk Management Officer in the Nevis Branch.

“While not asking too much of the association, and of course the players, we hope that from these matches Nevis will put another player on the West Indies team, or at least on the Leeward Islands team,” added Ms Brin amid applause from those present. “The level at which cricket is played in Nevis can only get better and we at the Development Bank of St. Kitts and Nevis wish you the best.”

Deputy Premier the Hon Mark Brantley, who is also the Minister of Sports in the Nevis Island Administration, and who declared the cricket season open, commented: “I heard Ms Brin from Development Bank talk about another Nevisian going on the West Indies and I am very pleased to hear that.”

Also giving remarks at the ceremony was Mr Carlisle Powell, former Nevis Cricket Association and Leeward Island Cricket Association President who in recounting that Nevis had put seven players on the West Indies senior team, said: “Our facilities have never seen the likes of what you find at international venues, so when you recognise that and put it into perspective, it says to you that our players are extremely talented.”