Charlestown, Nevis, May 31, 2019 (DBSKN) — Development Bank of St. Kitts and Nevis continues to support local culture and has once again sponsored one of the contestants vying for the Ms Culture Queen title in Culturama 45. The pageant, which will feature six contestants, will be held on Sunday August 4. 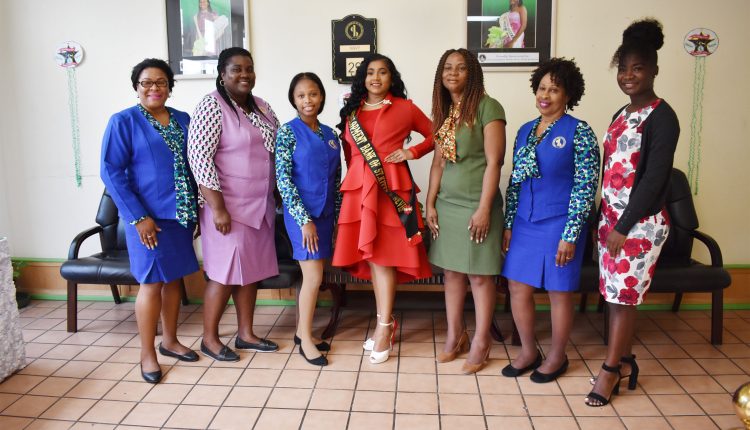 Contestant Number Five for the Ms Culture Queen Pageant Ms Harsha Parmanand (Centre) with staff at the Nevis Branch of the Development Bank of St. Kitts and Nevis. 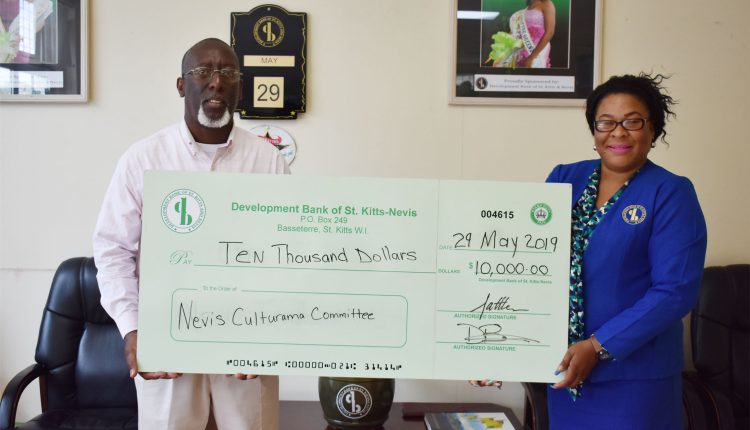 Sponsored by the Development Bank is Contestant Number Five, Ms Harsha Parmanand, who was born in Guyana in 1996 and moved to Nevis at the tender age of nine, and she considers it her home. She attended the Elizabeth Pemberton Primary School, the Charlestown Secondary School, and the Nevis Sixth Form College where she attained an Associate Degree in Accounting.

“I want to use this opportunity to thank the Development Bank of St. Kitts and Nevis for once again coming on board and sponsoring Nevis Culturama Festival,” said Mr Antonio ‘Abonaty’ Liburd, Executive Director, Nevis Culturama Committee, on Wednesday May 27 when he received the bank’s sponsorship cheque from Mrs Jean Alcendor-Browne, Development Bank’s Credit Risk Management Officer at the Nevis Branch.

“The Development Bank has been a perennial sponsor of Culturama and most specifically the senior pageants contests – the Miss Culture Queen Contest,” noted Mr Liburd. “They have been very successful over the years because they have actually won a few of the Miss Culture Queens in the past.  On behalf of the Nevis Culturama Committee I want to say a big thank you once again to the Development Bank of St. Kitts and Nevis for their kind sponsorship of Nevis’ Culturama Festival 2019.”

Mrs Alcendor-Browne on the other hand congratulated Mr Antonio ‘Abonaty’ Liburd and the entire Nevis Culturama Committee for keeping Nevisian culture alive by successfully hosting the best summer lime in the Caribbean over the last 44 years, which attracts not only locals, Nevisians and Kittitians living overseas, but also people from the region and further afield.

“Culturama festival is a true celebration of our heritage which has exceeded our expectations and everyone looks forward to it,” said Mrs Alcendor-Browne. “Now Culturama is in its forty-fifth year which is indeed a long time and we at the Development Bank are proud to partner with the Nevis Culturama Committee to showcase our rich culture. We encourage more persons to patronise Culturama 45 activities and especially the Ms Culture Queen Pageant.”

Ms Parmanand who is chaperoned by Ms Tywana Cranston and Ms Shaquoya Flanders lives by her motto ‘I don’t lose, I win or I learn’. She says the motto is of particular importance to her because she has seen how people can allow their circumstances to overwhelm and discourage them. According to her, they then take the approach of going through life instead of learning from their experiences and allowing those experiences to be part of the growth process.

“I am sponsored by the Development Bank of St. Kitts and Nevis and I really appreciate that they have sponsored me,” said Ms Parmanand. “Development Bank is owned by the government, and has been ‘lending a helping hand’ to citizens and residents of the Federation for the last 38 years. I promise that I will bring the Miss Culture 2019 crown to Development Bank.”