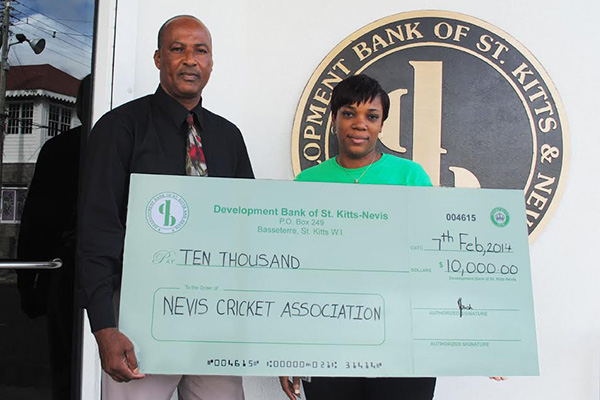 Basseterre, St. Kitts — President of the Nevis Cricket Association, Mr Keith Scarborough, has lauded the Development Bank of St. Kitts and Nevis for supporting his association’s reinvigorated drive in promoting the game of cricket by sponsoring this year’s First Division One Day Cricket Competition.

“I am indeed happy that the Development Bank of St. Kitts and Nevis has found it worthy to sponsor us for 2014,” said Mr Scarborough on Friday February 7 in Basseterre, when he signed a EC$10,000 sponsorship contract in the presence of the Bank’s Manager for Marketing and Product Development Ms Danienne Brin.

“We are going to call the competition ‘Development Bank First Division One Day Cricket Championship’, which will start on the 1st of March and is expected to be finished by mid April as four different grounds will be used. These are Cotton Ground, Brown Hill, Elquemedo Willett Park and Gingerland.”

According to Mr Scarborough, the Nevis Cricket Association has decided to chart a different course in 2104 that will not only help Nevis return to its glory days of producing great players, but also to bring back crowds to the grounds.

“We decided we are going to put a three to five year plan in place, with the aim of developing new young players under 15, under 17 and under 19 and so we have reached out to partners throughout Nevis in terms of the Umpires’ Association, Grounds’ Association, the Selectors, Government and now we are reaching out to sponsors across the Federation,” explained Mr Scarborough.

The new cricket season officially opens on Thursday February 13 with a ceremony that will be held at the Elquemedo Willett Park in Charlestown. The President said that his association intends to select a squad of forty under 23 players very early this year, preparing them for the upcoming U17, U19 and the Senior Nevis teams.

“We are looking for the young players because we want to change that mindset towards the whole game,” observed Mr Scarborough. “We see tremendous potential in some under-19 guys and a couple of them starred in the Leeward Islands Tournament and in West Indies Under-19.”

On receiving the signed contract, Ms Brin explained that the Development Bank of St. Kitts and Nevis has a mandate to promote total empowerment through economic, social and national development, and developing the skills of young people through the game of cricket was one of the ways to fulfil that mandate.

“Development is an all encompassing term and as a result we are not only limited to the economic development of the Federation of St. Kitts and Nevis,” said the Bank’s Manager for Marketing and Product Development. “At a higher level, the game of cricket provides financial stability to the players, and the Development Bank is positioning these young players for those opportunities.”

Ms Brin explained that through earlier sponsorships by the Development Bank, two players from St. Kitts have excelled in their areas of endeavour. She named them as Akeem Saunders who was on last year’s Leeward Islands Senior Team and Akheam Fox who graduated to playing Premier League Cricket in England last summer.

“We at the Development Bank of St. Kitts and Nevis have agreed to partner with the Nevis Cricket Association to ensure that Nevis, which has in the past produced a number of decorated cricket players at the international level, also produces new players who can proudly say that they were sponsored by the Development Bank,” concluded Ms Brin.

The sponsorship amount for the First Division One Day Cricket Tournament is EC$10,000 and a ceremonial cheque was handed over to Mr Scarborough by the Development Bank’s Business Support Officer Mrs Vernitha Maynard.