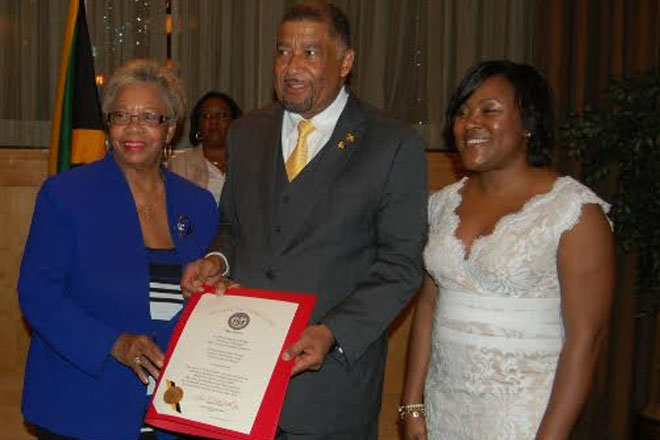 Washington Dc, United States (JIS) — Jamaica’s new ambassador to the United States, Ralph Thomas is calling on members of the Diaspora to seize the opportunity to participate more fully in the development and growth of Jamaica.

He was addressing a reception held in his honour at the St Gregory Hotel in Washington, DC last Thursday.

Ambassador Thomas stated that this could be done by engaging in wealth creation and investment, an important role that is being performed by foreign investors, but which can be broaden to include Diaspora investors.

Thomas further pointed out that there were a myriad of investment opportunities that are now available in Jamaica, that Diaspora members could avail themselves of.

“I will be working with the Diaspora to build bridges and connections between people, communities, institutions and government to connect with Jamaica in different ways so that they can benefit from these opportunities that currently exist with respect to the issue of economic empowerment,” he said.

The ambassador further stated that the government is committed to seeing that the role of the Jamaican Diaspora fully, evolves as a centerpiece for national development strategy.

Ambassador Thomas also used the opportunity to laud the Diaspora for continuing to provide invaluable support and assistance to the process of nation building in Jamaica.

“Today, I formally on behalf of the government and people of Jamaica, express sincere thanks to you members of the Diaspora for all that you have done, and will continue to do in the years to come for the Jamaica people everywhere,” he said.

During the reception, Maryland Senator Shirley Nathan-Pulliam presented Ambassador Thomas with a State of Maryland Resolution officially welcoming him to his new post.

The reception was attended by Jamaicans in the Diaspora, representatives of federal and state government and members of the diplomatic core.