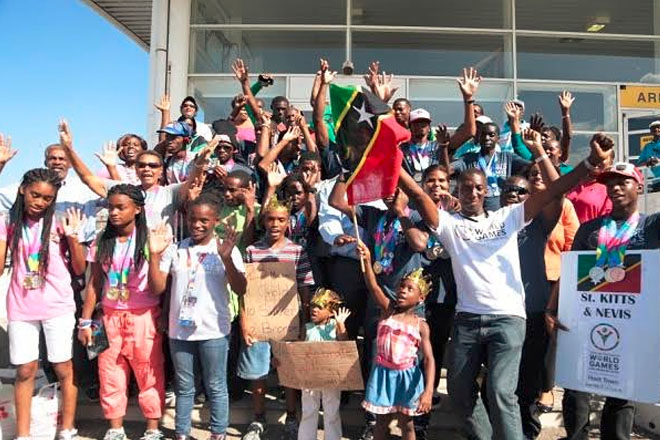 Digicel is proud of the St. Kitts-Nevis Special Olympians

The young Olympians’ exceptional performances resulted in a local record-breaking 23 medals (11 Gold, 10 Silver and 2 Bronze) at the recent Special Olympics World Summer Games which opened on July 25th in California, USA and culminated on Sunday, August 2, 2015.

Digicel St. Kitts and Nevis has long been a proud sponsor of the SKN contingent and not only contributed to their successful trip, but also used the platform as an avenue to spread awareness on Special Olympics and Special Olympians.

Head of the Delegation and National Director of Special Olympics in St Kitts and Nevis, Ivor Blake, reflecting on the performance of the athletes, stated: “These Games were one of the best in terms of medal count highlighting not just their talent, but the sheer grit and determination of the Athletes. The Team exceeded all expectations! There was not one single athlete that came home empty-handed and for that we are very happy”.

Blake also thanked the parents, families and fans who cheered and supported the athletes through various media and in various ways. Particular mention was given to Digicel St. Kitts and Nevis for committing early in the process with a generous financial contribution giving the Special Olympics Team the much-needed jumpstart.

Digicel joins in the many congratulatory remarks to the Special Olympics Champions who trained year-long to achieve these results, and say “well done – we are very proud of you!”