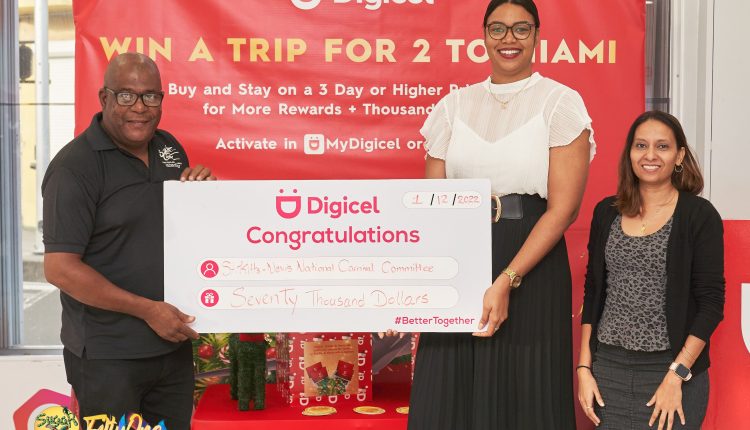 DIGICEL Partners With Sugar Mas as a Platinum Sponsor

Basseterre, St. Kitts, December 2, 2022 (SKNNCC) — Mega Telecommunications Provider Digicel, has extended sponsorship of EC$70,000 to the St Kitts Nevis National Carnival Committee (SKNNCC). This investment elevates them to the title sponsor for the 2022/2023 Soca Monarch Competition. The sponsorship will greatly enhance the competition and serves as another major input for Sugar Mas 51.

In a handing over ceremony held at Digicel’s retail store on Fort Street on Thursday 1st December, Digicel was represented by CEO, Karlene Telesford and Commercial  Manager Sabina Harrinarain. Public Relations Officer of the St. Kitts Nevis National  Carnival Committee, Clement O’garro was on hand to receive the cheque.

In a statement after the handing over on Thursday, December 1, Ms. Telesford stated  “Digicel recognizes the cultural and historical significance of National Carnival to the  Federation which is why we enthusiastically jumped at the opportunity to be a Platinum  Sponsor for this year’s Sugar Mas. We are delighted to be the Premier Sponsor for the  Soca Monarch as well as the Bacchanal Road Early J’ouvert. It is our anticipation that  this year’s festivities will capture the vibrancy and essence of the Kittitian and Nevisian  spirit which we are proud to be a part of. We commend the National Carnival Committee  for organizing the return of this festival after a two-year hiatus”. Mr O’garro praised  Digicel for recognizing the importance of the largest National Event on the Federation’s  annual Calendar and invited the company to continue its community spirit. Digicel has  established a major mobile footprint in its seventeen years in the Federation.