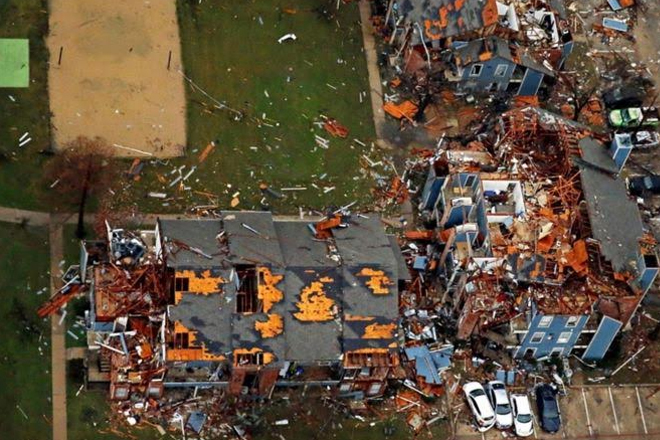 Dozens dead in US Christmas storms

(BBC) At least 43 people have been killed over the past five days by severe storms across southern and western parts of the United States.

The governors of Missouri, Oklahoma, and New Mexico have declared states of emergency.

In Illinois, three adults and two children were swept away in their car by the flood waters. In Texas, at least 11 people were killed by powerful tornadoes with winds of up to 200 miles an hour (300kph).

Hundreds of homes in Texas were reduced to rubble and cars were blown off the road. Five people died in their cars on a highway passing the city of Garland. Pedro Barineau of the local police said they had no chance.

“There were sirens that were going off, I mean multiple times and in multiple areas, notifying people of a tornado. However, people on the highway that were driving through they had no idea that the sirens were going off and the tornado was on them in a matter of seconds,” he said.

The winds in the state have scattered mangled cars and other debris for miles. Churches have been destroyed and trees toppled across a 64km (40 mile) area.

“It is total devastation,” said Mr Barineau. “It is a very difficult time to be struck by such a horrible storm, the day after Christmas.”

Texas Governor Greg Abbott said his office had declared Dallas County and three nearby counties a disaster area. He also warned people to be wary of snow in western parts of the state and of rivers spilling their banks.

Parts of New Mexico, where a state-wide emergency has been declared, are expecting up to 2ft (60cm) of snow. The New Mexico city of Roswell recorded 12.3 inches of snow on Sunday – an area record for a single day.

Oklahoma Governor Mary Fallin declared a state of emergency on Sunday in anticipation of blizzard conditions and an ice storm.

The bad weather forced the cancellation of nearly 1,500 flights on Sunday, according to tracking service FlightAware.com. About half of the cancelled flights were in Dallas, a major US flight hub.

While extreme weather in the US around Christmas is not unknown, meteorologists say that unseasonably high temperatures in some areas contributed to the severity of the storms.

The forecast for the eastern US is for high temperatures to continue – Washington DC pushed close to 70F (21C) on Sunday.