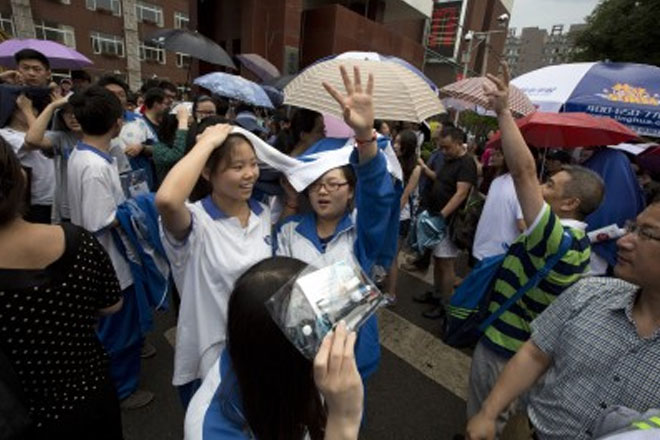 Drone is latest weapon against cheating on China school exam

Beijing (AP) — The latest weapon in the fight against cheating on China’s all-important college entrance exam is a six-propeller drone.

The contraption flew over two testing centers in Luoyang city in central China’s Henan province to scan for any unusual signals being sent to devices smuggled by students taking the annual test. No such signals were detected Sunday, the first day of the exam, a Henan province news website said.

The drone cost hundreds of thousands of yuan (tens of thousands of dollars) and is as big as a gas station pump when extended, said Lan Zhigang, from Luoyang’s Radio Supervision and Regulation Bureau.

“A drone has its advantages. In an urban area full of tall buildings, various barriers limit the operating range of devices on ground, while the drone can rise up to 500 meters (1,640 feet) and detect signals over the whole city,” Lan said.

Almost all Chinese high school graduates must take the test — more than 9 million students started it Sunday — and the scores are the key criterion for which tier of university they can enter.

Pressure is immense and many students spend months cramming. Parents travel to the cities where the tests are given to stay with their children during the exam, which can last two or three days. Those who fail can repeat a year or try to find a low-paying, blue-collar job.

Cheating is common given the high stakes, and methods include selling supposed answers, hiring surrogate test-takers and using wireless equipment to communicate during the test.

The Education Ministry said Saturday that it had arrested 23 people since late May over attempts to arrange cheating. Students caught cheating can be barred from taking the test for up to three years.