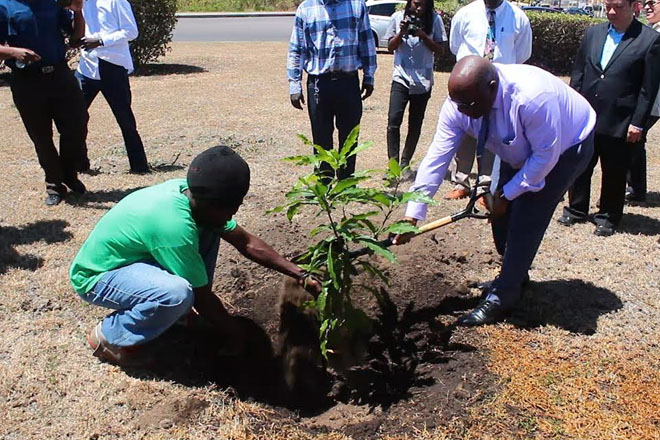 In recognition of the theme for Earth Day International 2016 “Trees for the Earth”, government officials, Earth Week SKN representatives and supporters gathered at the airport roundabout to plant trees.

Spokesperson for Earth Week SKN Jonell Powell spoke of the inspiration behind Earth Week SKN and encouraged everyone to make “Going Green” a lifestyle.

He said, “We thought that we ought not just stay at observing one day and so an entire week surrounding earth day has been created and we hope that this will transcend into not just a week or a day but into an everyday, year round event. We want everybody, every day of the year to think green and to go green.”

Prime Minister Dr. Hon. Timothy Harris said it is critically important to the quality of life of each individual.

“I am personally a firm believer that going green is the way to go. Preserving the resources of the earth, conservation measures, all these things are critical to a sustainable earth. Whatever we can do as individuals, as groups, as countries to encourage sustainable approaches to life and living will be critical for a sustainable earth,” he said.

According to Deputy Prime Minister and Minister of Education, Hon. Shawn Richards, the Earth Week campaign plays a significant role as education about climate change is essential.

“I am hoping that the different initiatives being taken as part of earth week would help to create that sense of awareness and that there is that general recognition within each and every single individual that this earth is about you, it is about ensuring that you have a better quality of life. It is about ensuring that the St. Kitts and Nevis that you leave today is better for future generations of Kittitians and Nevisians,” he said.

Other Activities for Earth Week SKN include “The Biggest Cleanup in History”, Climate Education Week in Schools, A Green Fair and the OAS/CFBC Hydroponic Launch.

St. Kitts and Nevis Will Join Over 193 Around The World In Celebrating Earth Day On April 22nd.