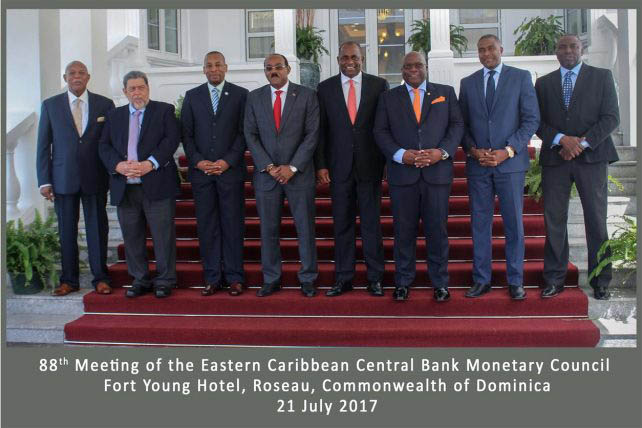 This move will improve the public’s understanding of the eight-member Eastern Caribbean Currency Union’s financial system and encourage informed debate, as such reports, which are predominantly issued by central banks around the world, are available online.

News of the forthcoming publication came in a Communiqué from the 88th Meeting of the Monetary Council of the ECCB, which Prime Minister Dr. the Honourable Timothy Harris attended last Friday, July 21st, 2017 in Dominica.

The Monetary Council is the highest decision-making authority of the ECCB. It comprises eight Ministers of Finance, one from each member government in the Eastern Caribbean Currency Union (ECCU), namely Anguilla, Antigua and Barbuda, Dominica, Grenada, Montserrat, St. Kitts and Nevis, St. Lucia, and St. Vincent and the Grenadines.

Its Communiqué states that the bank’s decision to publish a Financial Stability Report is “in keeping with its goal of maintaining financial stability.”

The official communication by the Monetary Council of the ECCB further states that the Financial Stability Report is intended to provide information on the soundness of the ECCU financial system, as well as the various initiatives that regulators and governments are pursuing to mitigate risks to the system.

The Financial Stability Report is also aimed at identifying risks and vulnerabilities in the ECCU financial system and assessing the system’s resilience to domestic and external shocks.

A March 2017 IMF Working Paper titled Financial Stability Reports in Latin America and the Caribbean notes that, “Over the past few years, financial stability reports (FSRs) have become a common and regular feature of financial communication in the Latin America and the Caribbean region (LAC)… In 2002 the supervisory authorities of two countries began publishing FSRs; their number has now risen to 19.”