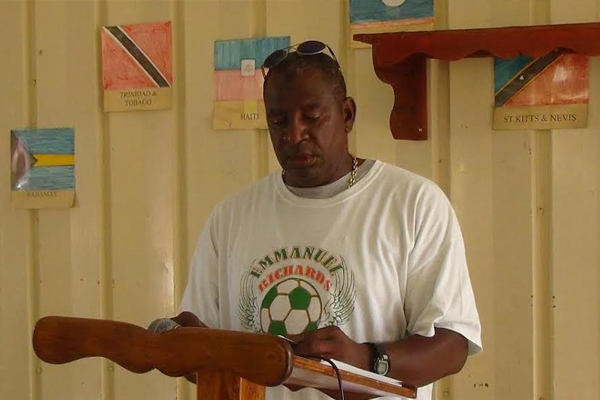 Richards was warmly applauded for his initiative which significantly is now in its tenth year.

The brief but impressive ceremony was chaired by Richards himself who gave a historical overview of the program.

He noted that it commenced in 2004 with only 4 to 6 participants and absolutely no sponsors. He gave special thanks to one of the parents in the pilot project, Evred WEBBO Herbert who doubled up as Coach.

By 2005, there was an increase in the participants and by that time the first official sponsor, Nevis Multi Line Services, was on board.

By 2006, the Hon. Mark Brantley also came on board as a sponsor and by 2007, a number of additional sponsors joined in the effort and the number of participants increased tremendously.

He thanked all of the sponsors for their assistance throughout the year and promised that he still has it in mind to present each sponsor with a well designed plaque in recognition of their contributions.

Permanent Secretary in the Ministry of Sports, Mr. Keith Glasgow, noted that 10 years in anything shows continuity, endurance and sacrifice and applauded Richards for his efforts in developing the Football skills of the children. He pledged the continued support of his Ministry to the endeavour.

Public Relations Officer at the Social Security Office in Charlestown, Walter Morton, noted that apart from learning Football skills, the children will learn discipline and pointed to the value of discipline not only in sports but in the work place and in every sphere of life.

He promised that Social Security will continue in its role to sponsor such activities that will lend to the positive development of the society and vowed that in addition, the institution would seek to sponsor a swimming camp starting next year.

Mrs. Lesa Herbert in representing the Bank of Nevis, noted that her institution opened its doors in 1985 and has ensured that positive projects within the community are given assistance.

She lauded Mr. Richards for his sterling efforts and also pledged the continued support of the renowned Bank to the program.

Some forty students were present as the first session on the field commenced shortly after the opening ceremony concluded.