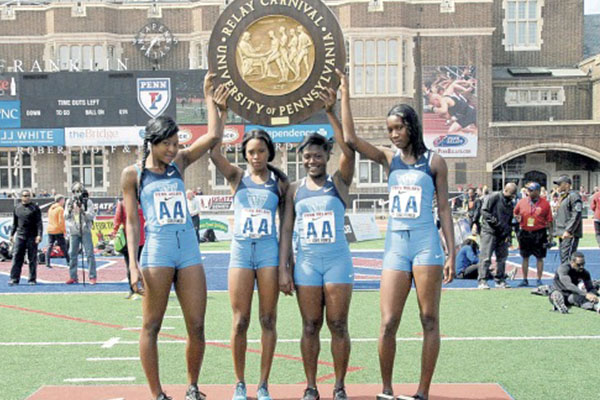 This was the third time Edwin Allen were winning two events at the same Penn Relays.

Despite coming into the day as favourites to win three relays, they lost the 4x800m to defending champions Colombia High of New Jersey, but the Michael Dyke coached girls rebounded with two solid victories, clocking 3 minutes 34.76 seconds to just miss the Penn but a win is a win and they are grateful.

Last year’s champions Holmwood Technical were second with 45.53 seconds, with Wolmer’s Girls third in 45.62 seconds. Long Beach Poly were fourth with St Jago fifth in 46.20 seconds, and Hydel High sixth in their first appearance in 47.01 seconds.

In the first final of the day, Edwin Allen had to once again play second fiddle to the New Jersey school, as despite running a season’s best 8 minutes 50.36 seconds, had no answer to a brilliant 2 minutes 02.55- second anchor leg from Olivia Baker, as she destroyed the field with a well paced leg, as her team won in 8 minutes 45.37 seconds.

Once again the Edwin Allen team left Eubanks with a lot of work to do on the anchor leg and while she took them from fourth to first with a 56.00 plus first leg, she had nothing left to counter Baker.