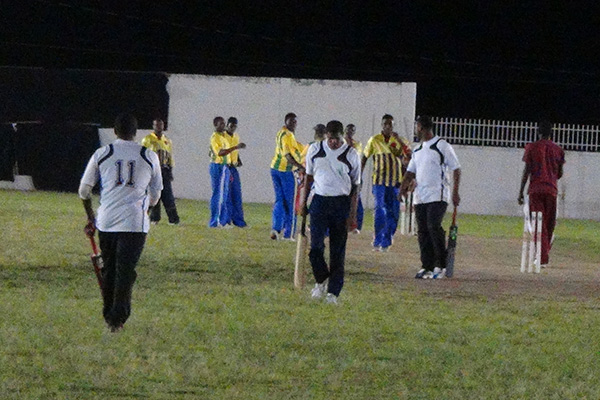 Empire batted first and was struggling when they found themselves just having scored 42 runs after 7 overs.  However, the final 3 overs from the lawmen were totally erratic and were duly punished all around the Park.

Empire getting to 101 for 4 from their 10 overs.  Adelvin Phillip top scored with 46 not out and Joel Simmonds scored 26.

For the law men, Alexis picked up 2 wickets and George 1.

The Police in response started well with a well struck boundary by Laborde off the first ball.

A straight six by their main batsman Huggins only flattered to deceive as he was unfortunately run out shortly after. Laborde soon went bowled and that effectively put an end to a serious chase by the Police.

George later swung his way to an exciting 15 but it was far from enough.  Laborde got 9 and Huggins scored 10.

Nisbett and Boland picked up 2 wickets each and Hendrickson, Phillip and Mintos all collected 1 wicket each.

The first scheduled game of the evening was not played as Highlights female failed to show up for their match against Pennyless All stars females and are now therefore out of the competition , having not shown up for at least two matches..

The semi finals will now be played on Wednesday and Thursday of this week as follows:

Pennyless All stars females get a bye into the finals as there are only three female teams left and they led on points during the preliminary rounds.

SDA Jets v the winner of the match between Highlights and Pennyless All stars.

Both finals are slated for Saturday 18th January, commencing at 6pm.

It is understood that the finals will be coordinated in conjunction with the Football Association which will be in charge of the bar on the big night.