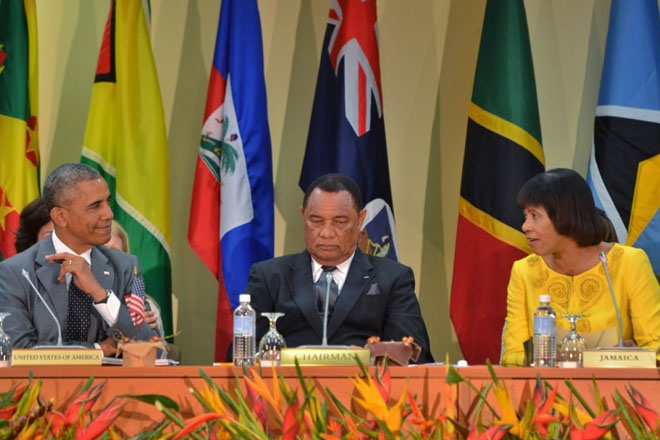 Georgetown, Guyana — The Caribbean Community (CARICOM) is moving forward from the recent CARICOM-US summit with seed funding for a sustainable energy programme, a commitment to help fast-track ICT development, and continued support for established US-CARICOM security partnerships, among other key initiatives.

US President Barack Obama announced the provision of US20 million in initial funding for a sustainable energy initiative that should also include a task force on renewable energy to assist with creating the much needed regulatory framework for the sector.

The US also expressed a willingness to work bilaterally with member states to help leverage private sector investments to build on the initial funding, as there is great interest in renewable energy among US investors. This offer matches the earlier signal from CARICOM that public private partnerships can help to unlock the financing for projects in the region’s sustainable energy sector.

The region, in 2013, adopted the CARICOM energy policy and the Caribbean sustainable energy roadmap and strategy to serve as a platform upon which it can collectively deal with its energy challenge. A multi-donor energy co-financing facility for Caribbean sustainability, which is being championed by Trinidad and Tobago and is seeking to raise US$1 billion in grant and investment capital from donor countries and institutions, also signals the region’s strong resolve to tackle one of the major barriers to clean energy development within CARICOM.

The US Energy Department has offered further support through two proposals; an Island Energy Playbook as a planning tool for clean energy development projects in islands states, and an energy financing solution from which CARICOM could draw and which can be further discussed at the energy and climate partnership of the Americas (ECPA) and the sixth clean energy ministerial meetings in May this year.

The region received US support for its proposal for a CARICOM-US task force to fast track ongoing work on developing a single ICT space, and to help establish links with Silicon Valley. The Caribbean Community has identified innovation, technology and in particular ICT as essential ingredients for economic growth and competitiveness and it sees a highly trained workforce as critical to achieving this goal. CARICOM therefore welcomed the stated willingness by the US to be a partner in capacity building and skills training.

There would be follow-up by the US on what the Community described as “the unjust labelling of the region” resulting from being categorized as a “high risk area” for financial services and as jurisdictions of concern for money laundering. CARICOM heads had announced at their inter-sessional meeting in the Bahamas in February that this categorization was affecting the correspondent relationship with US banks and could inhibit investments.

The US also supports the proposal for a high-level security meeting to strengthen cooperation. The meeting is scheduled to be held in The Bahamas in early June.

The CARICOM-US Summit took place on 9 April 2015 in Kingston, Jamaica, under the joint chairmanship of the CARICOM chairman, Prime Minister Perry Christie of The Bahamas, and the US President Barack Obama.