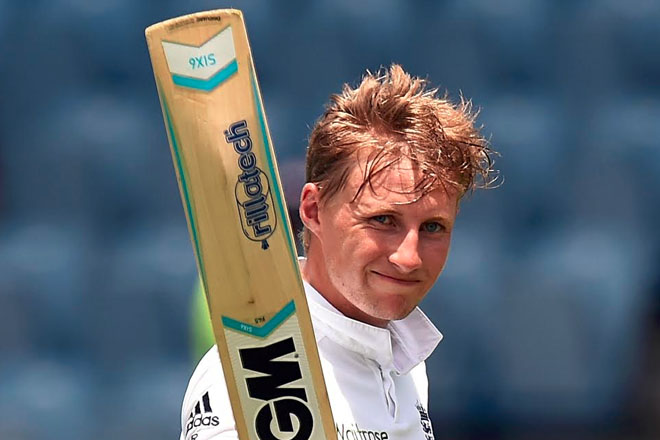 England rely on Root after Pakistan 378

(ESPN Cricinfo) – There will come a time when Joe Root’s back becomes a subject of national concern. Not quite yet. His troubled stretches as yet only concern the physios and anyway, as he sought to bat England into a position of authority against Pakistan, Xi Jinping and David Cameron only had eyes for selfies with Manchester City footballers.

The longer that question is not pressing the better for England. Root, unbeaten on 76, again brought certainty and zest to England’s middle order, his Test average past 57 now. He is playing at a consistent standard that only the best Test players ever attain. England trail by 196 and, of the seven wickets remaining, his is naturally the most important.

This has been a good contest on a good pitch, good-natured, too, quite fortunate considering that comments in this near-empty stadium travel around the ground as if Dubai is trialling a huge invisible microphone.

Root’s most awkward moment, once he had negotiated a fiery new-ball burst from Wahab Riaz, speeds in excess of 90mph, came with the light fading, after a stretch of that wooden back. He stands lower against the spinners and it adds to his problems. A loose drive at a googly from Yasir Shah, which flew past slip, suggested his mind was briefly elsewhere. He probably needs a break but since when did an England cricketer involved in all three formats get those?

England coped well with their first sight of Yasir, the Pakistan legspinner who many believe will decide this series in their favour. His 17 overs cost 59, although he did unearth Alastair Cook, on 65, a routine turn to leg falling obligingly to leg slip.

Until then Cook had been in strikingly good order after his 263 in the first Test, upping the power a notch from Abu Dhabi and even coming down the pitch to smite Zulfiqar over midwicket on one occasion. When an inside-edge against Wahab also spared him a Pakistan lbw referral on 41, he responded with a crisp pull.

So this was the Yasir unknown to casual English observers. He was a busier, more bustling spinner than Adil Rashid, about 10kph faster, a comparatively rotund, slightly dishevelled figure with a drying rag hanging out of his back pocket. He turned several balls sharply, but England played him well. Jonny Bairstow, unbeaten at the close, will give thanks for all those Yorkshire net sessions against Rashid.

Cook, on 27, also had fortune when he misjudged a sweep and a delivery from the left-arm spinner, Zulfiqar Babar, brushed glove and pad before crashing into the base of middle stump without dislodging a bail. The immovable batsman of Abu Dhabi was blessed, so it seemed, with immovable bails.

England lost Moeen Ali and Ian Bell within five overs of the new ball, Moeen falling to an excellent reaction catch by Shan Masood at short leg – the second great catch under the lid in this Test, following Jonny Bairstow’s chest-assisted effort on the opening day – and Bell caught at slip as he was drawn into playing a ball that left him. Bell’s dismissal came with a cry of anguish as the ball headed towards the keeper’s gloves.

Pakistan’s batting on the first day had belonged to the staunch figure of their veteran captain, Misbah-ul-Haq. Such certainty was hard to find on the second morning as Misbah departed in the opening over and Pakistan’s lower order duly followed, sometimes skittishly. From an overnight 282 for 4, they lost six wickets for 96, a reward for England’s resolve. A strong-minded pace quartet exerted that control, allowing 2.46 runs per over while the spinners leaked 4.26.

Asad Shafiq was the mainstay, last man out for 83, but even his smoothly assembled innings ended in obvious discomfort as he was struck just above the knee by a low full toss from Wood and, although he batted on, soon slogged to short midwicket. He did not field. Wood had again been persistently aggressive – more so than in Abu Dhabi – and his return of 3 for 39 in 19.5 overs in discouraging conditions represented his best Test figures.

Misbah had struck a blow for the over-40s club on the opening day, but perhaps the old limbs were a bit stiff and mind a bit weary on the resumption. Stuart Broad took five balls of the first over to dismiss him, firing in three short balls, letting the fourth go astray down the leg side then finding a full length with the fifth delivery to have him lbw.

It was only the 13th incident of a Test hundred by a batsman of 41 or older and no Pakistan batsman had previously managed it. It was a classic Misbah innings: long periods of judicious inertia interspersed by sudden bouts of aggression. Many over-40s would recognise the symptoms only too well.

Sarfraz Ahmed’s zestful knock came to grief after drinks with a dragged drive to mid-on where Anderson plunged forward to hold the catch. Wahab did not detain England for long, a frenetic visit ending with a top-edged skier to give Anderson a second catch.

Rashid became the sixth England bowler to take a wicket in the innings when Yasir had a swipe and Stokes held the catch at slip. Zulfiqar then ducked a full-length delivery from Wood, so deceived that his bat missed the ball by several feet, his review (Pakistan had one to use up after all) at least giving the third umpire the chance for a bit of a chuckle.

That left Imran Khan: seven matches, three innings, no run. No other batsman had played more than three Tests without scoring a run. It was time for him to end the tomfoolery.

Shafiq gave him the benefit of a prolonged chat in mid-pitch and then tried to farm the strike. Imran’s first ball, from Rashid, brought a rudimentary leg-side hack which fell a yard short of Anderson at mid-on to cries in unison of “catch”. Then Shafiq was struck by Wood. Imran was not to face another ball. The wait goes on.