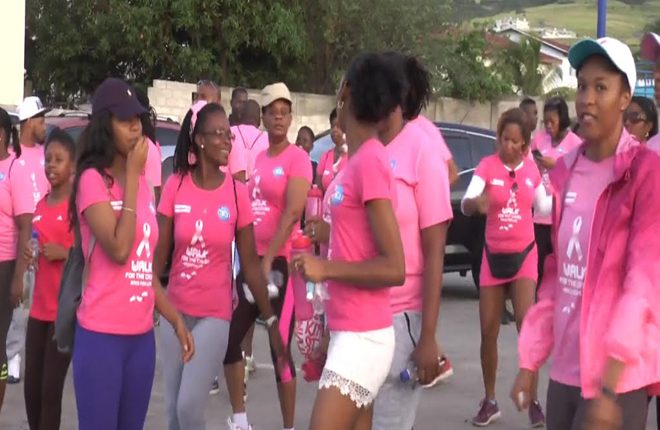 (ZIZ News) — A sea of pink covered the island’s main roads on Saturday as The Essence of Hope Breast Cancer Foundation hosted its 7th Annual “Walk For The Cure, Race For Life Event”.

The foundation’s “Walk For The Cure, Race For Life” fundraising event attracted thousands of participants who were seen warming up before the walk began.

Employees, their friends and families took part in the event, in a bid to raise awareness of and support for the fight against all types of cancer.

The exercise is aimed at raising funds to assist cancer patients in St. Kitts and Nevis.

The crowds of supporters met at the Caribbean Cinema’s parking lot where the walk began and walked toward the F T Williams Highway, then along the Kim Collins Highway.

The crowds of supporters then walked to the third roundabout in the Frigate Bay area where the walk ended.

Breakfast and refreshments were then served.

The Essence of Hope Breast Cancer Foundation is a non-profit organization organized exclusively for charitable, educational and scientific purposes.

The foundation was officially launched in October 2010.